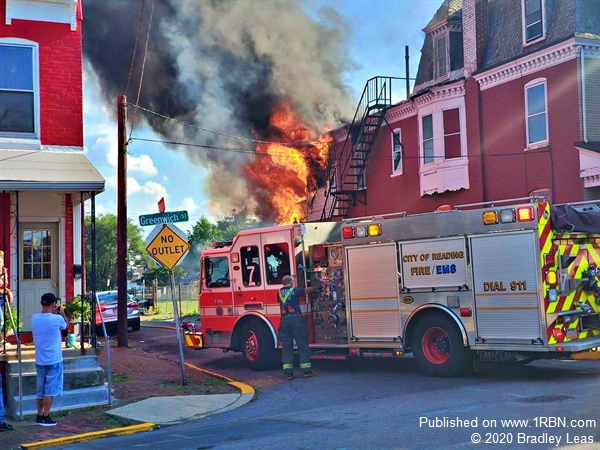 Photo by Bradley LeasReading Engine 7 arrived with fire out the rear of this vacant dwelling at 136 Greenwich St., 7/17/20.

Engine 7 arrived at a three-story EOR vacant building with fire showing from the rear. With the building boarded up, firefighters attacked the fire from the outside until the arrival of a ladder company. Crews began working on removing the plywood coverings and placing portable ladders.

Crews stretched hose lines into the structure and began a search. Neighbors advised that a homeless individual may possibly still be inside. Crews reported the fire extended into the third floor and roof.

With temperatures in the mid-high 90's, Deputy Chief Stoudt (Car 4) requested a second-alarm. All searches were clear, and the fire was placed under control at 6:13 P.M.

Several firefighters were treated for heat exhaustion, with some transported to Reading Hospital. Units from Spring, West Reading, and Muhlenberg Township assisted. The Fire Marshal's Office is investigating.