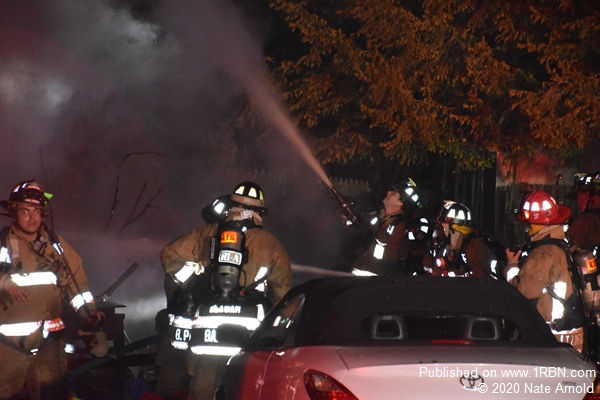 Photo by Nate Arnold Large caliber hand lines are deployed to the Delta side on Bailey St. 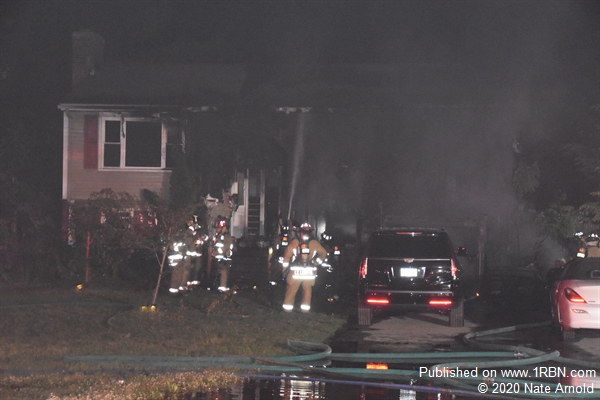 A mid-evening fire destroyed a two story raised ranch style home and displaced four residents but Agawam fire crews were able to save one occupant who was still trapped inside the house.
911 calls for the fire at 15 Bailey Street started coming in just before ten o'clock in the evening on Friday June 12, 2020 first reporting the roof of the home on fire and then reporting an occupant on the front lawn, possibly also on fire. First in Agawam jakes found the home well involved in fire on both floors and a panic stricken resident in the yard. Members were informed that one of the homes' owners was trapped inside and wasted no time in mounting an aggressive interior attack. Engine Co. 1 stretched on the dwelling and made a hard, dangerous push through the house to get to the trapped occupant. Making the grab, fire fighters brought the unconscious resident outside and began cardio pulmonary resuscitation efforts in the yard before loading the individual into AFD's Rescue Co. 2 ambulance for transport to Baystate Medical Center in Springfield.
On scene, once the rescue was made, crews switched to a defensive attack and darkened down the main body of fire within 20 minutes before heading inside to overhaul and knock down remaining hot spots. At the height of the fire, all Agawam fire fighters, both career and paid-on-call were committed on scene and the West Springfield Fire Department was called in for station coverage. The cause of the fire remains under investigation by the Agawam Fire and Police Departments as well as the Massachusetts State Fire Marshal's office.