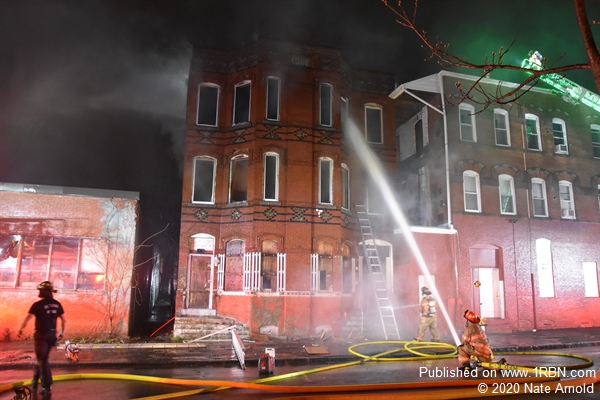 Photo by Nate Arnold A heavy stream appliance is worked into the upper floors of 106-108 Pine St. 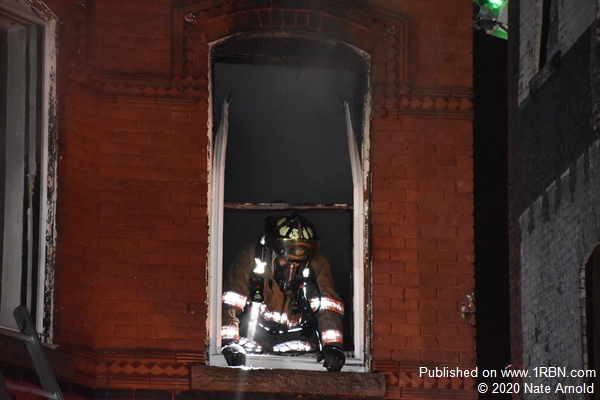 Crews responded just before 8:00 P.M. to multiple 911 calls reporting that the vacant apartment building at 106-108 Pine Street was on fire and first-in companies found heavy fire venting from the 'Charlie' side of the building. First alarm companies surrounded the building on all four sides and began to attack the fire.

With the 'Delta' side exposure building less than 10-feet from the fire building, and out of an abundance of caution, Pine Street command struck the second-alarm, bringing in most of the remainder of on duty crews and calling for mutual aid from South Hadley and Chicopee to respond for station coverage.

Companies on scene set up two ladder pipes and several hand lines to attack the fire in defensive mode as other members attempted to force entry but were stymied by substantially reinforced doors on the 'Alpha' side that required extensive manpower and equipment to open up. Within an hour, the main body of fire had been darkened down and Jakes entered the building to overhaul and check for extension.

The cause of the fire is under investigation by the HFD Arson Squad and the State Fire Marshal's Office.