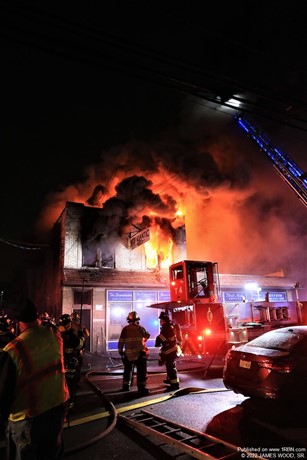 GARFIELD, NJ - Garfield Police received an alarm of fire at 450 River Drive, Firematic & Safety Equipment, around 4:45 A.M. on January 24th. An icon to the fire service, Firematic has been in business for 74 years and has served many fire departments over the years with various fire gear.

A patrol car was dispatched to that address and the officer arrived to find smoke coming from the second floor with fire showing. Garfield Fire Department had already been dispatched and was notified that they had a working fire.

Chief Marano arrived on the scene to find heavy fire coming from the second floor that was well involved and requested a second-alarm.

It was unknown if there were any residents living on the second floor at the time. Firefighters began a search, but were driven back from heavy fire. Crews began to advance hose lines, but as conditions began to deteriorate, they were told to exit and went to exterior operations.