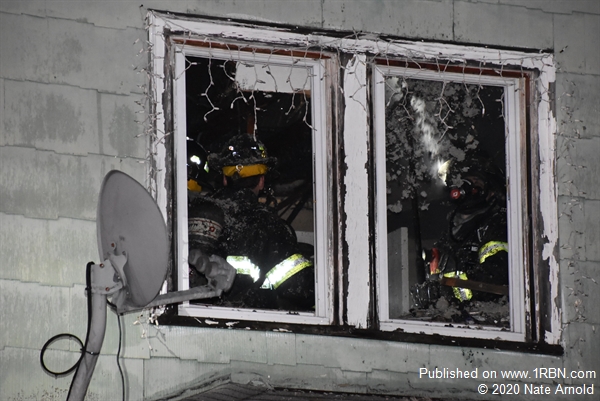 Photo by Nate Arnold Members of the Rescue Squad and Truck companies overhaul the second floor of 11 Arion Place.

Springfield, MA - A fire that is being attributed to faulty electrical wiring burned the roof off a single-family dwelling in the Liberty Heights neighborhood of Springfield just a week before Christmas.

Companies responded to the 3:00 A.M. 911 call on December 14, 2020 to find heavy fire venting from the attic of the home on arrival. Crews split up and conducted an interior attack and exterior attack on the fire simultaneously using small caliber hand lines from the aerial of Truck 4, so as not to endanger the members operating inside the structure.

Using this transitional attack, the main body of fire was knocked down within 15 minutes of the arrival of the balance of the assignment. Companies then overhauled the building and searched for hot spots for the next hour-and-a-half.

The cause of the fire was linked to faulty wiring in the electrical system. Several residents were displaced by the fire and were assisted by the Red Cross.