Man Jumps to Escape House Fire with Explosions in Elsmere 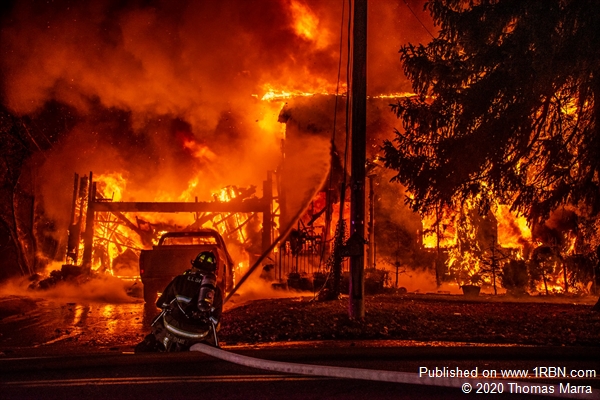 Photo by Thomas MarraOne person jumped to escape a house fire with multiple explosions in the Town of Bethlehem on 10/24/20. 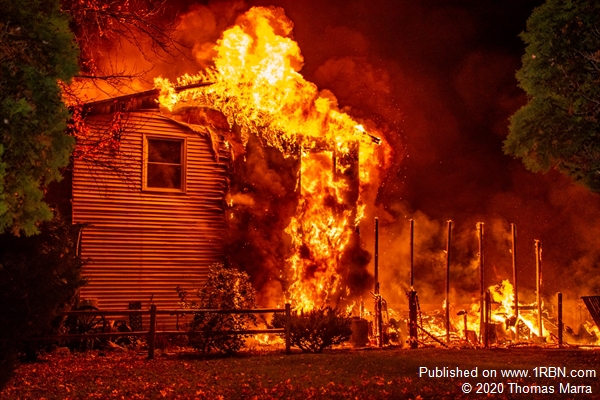 Photo by Thomas MarraFlames lit up the night sky with an orange glow that could be seen from Glenmont. 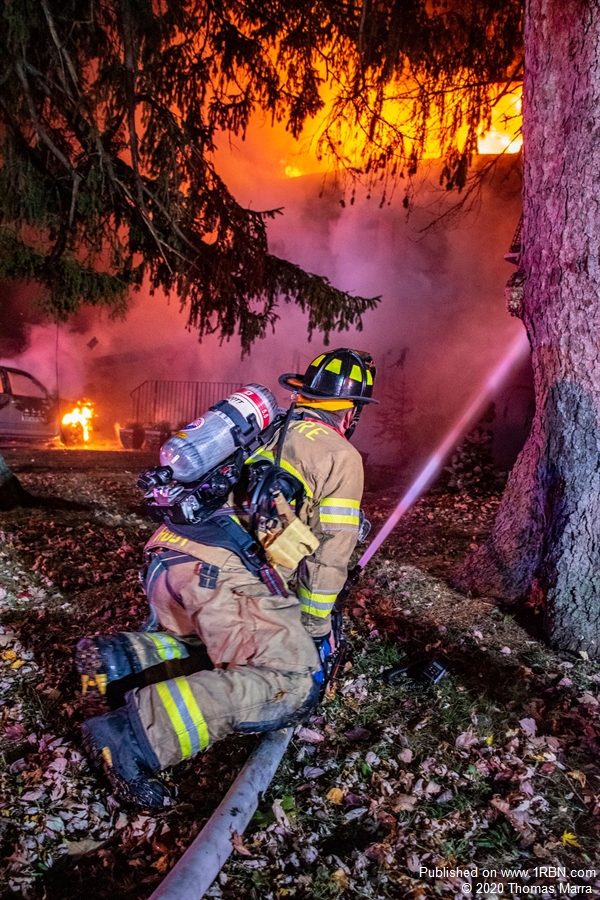 Photo by Thomas MarraFirefighters were advised to stay clear of the collapse zone since the structure was deemed unstable. 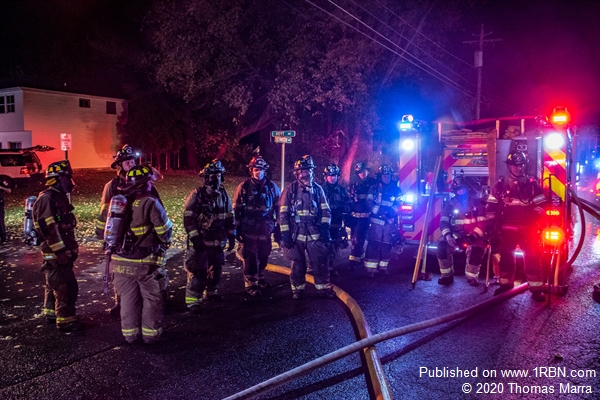 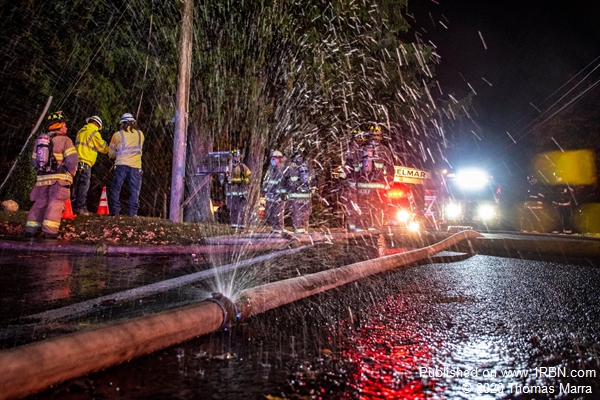 Photo by Thomas MarraSix fire departments responded to the scene of this massive blaze. 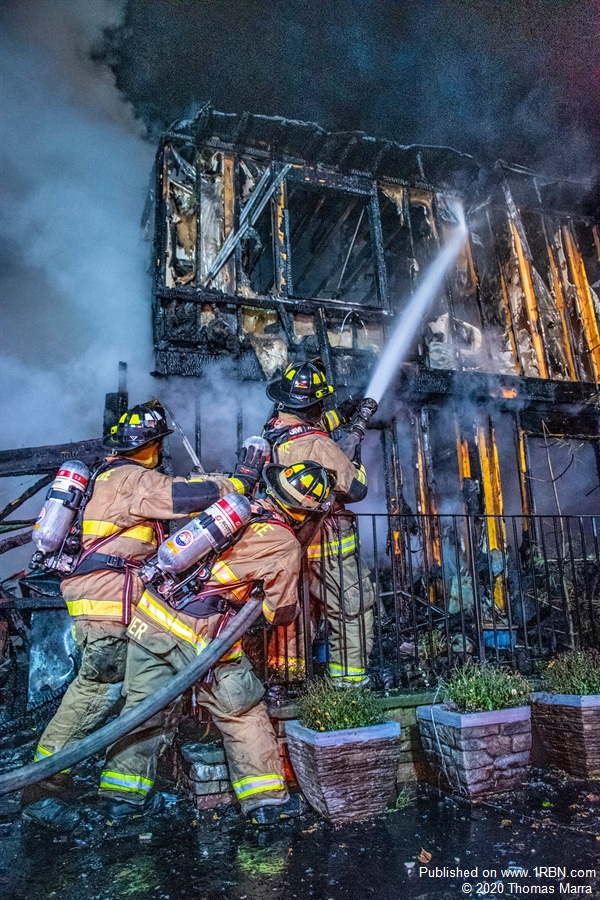 Photo by Thomas MarraThe residence was fully-engulfed in flames within minutes. 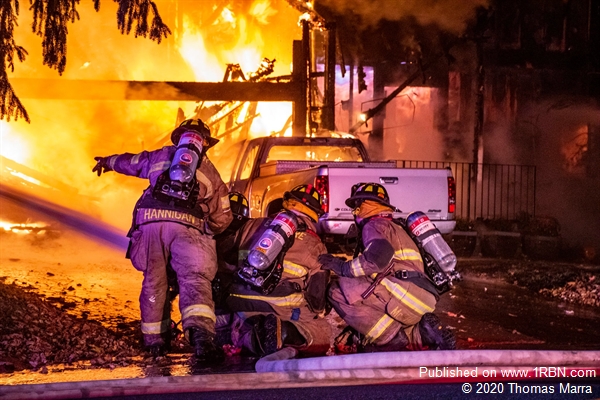 Photo by Thomas MarraMultiple explosions at the scene kept firefighters back. 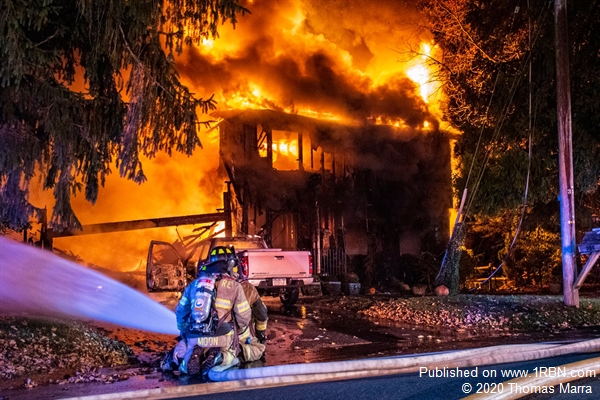 Elsmere, NY - A man jumped from a second floor window to escape a fully-involved fire at his Elsmere home on Saturday, October 24th.

Multiple 911 calls began flooding the dispatch center for reports of a structure fire with people trapped inside with multiple explosions coming from the residence at 28 Kenwood Avenue at 11:18 P.M.

Assistant Chief Marc Futia of the Elsmere Fire Department arrived on the scene and stated that there were multiple explosions and declared a Signal 30, which indicates a working structure fire. He said he could see the glow in the night sky while responding to the fire.

Futia said, “When you hear that people are trapped and then you pull up and you see it like that, you say to yourself ‘please don’t let there be anyone in there'. Your heart is racing then.”

Futia said that first-arriving units were immediately pushed back from the intense heat.

Three people were inside the house at the time of the fire, with one person jumping from the second floor window. The other two were able to make it out on the first floor.

One person refused medical attention, another suffered smoke inhalation, and the individual who jumped was transported to Albany Medical Center Hospital with lacerations and was later airlifted to the Westchester Burn Unit for damage to the lungs, according to Futia.

There were many difficulties fighting the fire, including a compromised structure, numerous explosions, power lines, koi ponds and deep mud.

All responders were kept back from what is called the “collapse zone” when the garage suddenly collapsed.

“We determined right away that nobody was going into the building,” Futia said. “Because the building was already compromised, you could see the shift and bows in the walls and the walls started moving.”

Two vehicles were in front of the residence which also caught fire and caused more explosions. There were also numerous trees and bushes on fire and Futia said there were more things on the property that were on fire than there were not on fire.

According to Futia, there were a few koi ponds on the property that were hard to see in the dark and a few firefighters fell into them, however, nobody was injured. The large amount of water used caused deep mud puddles, creating difficulties for firefighters walking through with their heavy gear.

National Grid also responded to the scene when the power lines to the residence burned and fell into the front yard.

The Elsmere, Selkirk, Delmar, Slingerlands, North Bethlehem and Onesquethaw Fire Departments responded to the scene, with Onesquethaw and Selkirk having an engine on standby as well.

Ladder trucks from Elsmere, Selkirk and Delmar were placed above the residence and flowed a constant flow of water to knock the fire down. The bulk of the fire was under control in about 25 minutes and mainly knocked down within a few hours.

The Town of Bethlehem Highway Department was called to bring in an excavator to help knock down the structure to allow crews to better extinguish the fire.

Fire crews were called back to the scene Sunday morning after a neighbor called saying the headlights were still on in a car near the property, and they were concerned something could happen to the battery to start another fire. There was also some fire that flared back up in the rear.

There were no injuries to any firefighters on the scene.

The cause of the fire is still under investigation by the Bethlehem Police Department Fire Investigation Team, however, it does not appear suspicious, and appears to have started on the first floor in the rear of the structure in the area of the kitchen, according to Futia.

Futia says one cat was lost in the blaze.

“Just to see how well each fire department in the town worked together--that was nice seeing that,” Futia said.