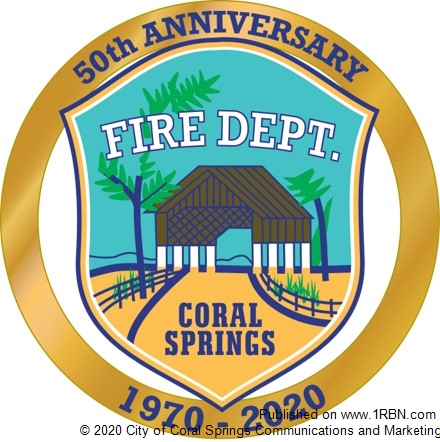 In 1963 Fort Lauderdale developer Coral Ridge Properties planted five employees in the desolate farmland of what would become the City of Coral Springs. The state required residents to file the charter to officially be recognized as a City. Luckily, those five first residents had little need for fire and emergency services. By 1965 homes were popping up and a community was taking shape.

Until 1970, residents in Coral Springs relied on fire protection services from the nearby city of Margate. By then the population had grown to 18,000 and the Coral Springs Fire Department was formed as a volunteer organization, with nine firefighters. The department was led by an appointed citizen, Bob Fuller, who served as Fire Chief from 1970-1971. Fuller was also the City’s first Vice Mayor and owner of the famous “Roundhouse” on Coral Hills Drive. Under Fuller’s leadership, the first fire station was established in the heart of the city at 3800 NW 85th Avenue. Coral Ridge Properties donated the first fire truck, a 1966 750-gallon pumper that suctioned water from surrounding canals, because there were no fire hydrants. Later, the City would fund the cost of the fire stations, equipment and operating expenses. A team of trained, dedicated volunteers responded to calls of brush fires, house fires and car accidents. They arrived in their personal cars, which were equipped with a red jumpsuit, coat, pair of boots a plastic helmet and an axe. A few members would be designated to retrieve the truck and meet at the scene.

This volunteer system sustained the growing City for decades. Fire Administrator, Don Eveker, was quoted in a Sun-Sentinel article ‘Fire Protection’ from 1979, “Our theory is, get the equipment. As long as we have the equipment and the buildings, the manpower will come.” In 1979 the City’s Volunteer Fire Department was rated one of the best volunteer units in the country. The volunteers were mostly professionals, including lawyers and doctors.

In the mid-70s, a gas crisis urged a small payment of $3 per call as firefighters responded to calls with personal vehicles. This was just a small token of compensation in comparison to the many hours they would sacrifice attending to the needs of the City. The volunteers were committed to training, using buildings set for demolition and already damaged vehicles, something the department still does today.

The Coral Springs Fire Department added to the history the our City’s first structure in a unique way. The small, 20x 30 building, that was built as the Coral Ridge Properties sales office and later became our first police station was used for smoke training. Igniting materials caused the building to catch fire. This got the attention of residents who realized the potential historical significance of the building, and the Landmark Restoration Committee was formed. The building was eventually moved to Mullins Park, restored, and serves as the Museum of Coral Springs History. Ironically, the museum and the City’s second fire station were dedicated on the same day.

Throughout the 1980s, Coral Springs experienced the most growth. Growing from a population of 37,349 to 78,864 meant emergency services would need to grow to meet the demand. A Fire Prevention Division was created under the leadership of Fire Marshall, Anthony Buck. These experts conducted fire code inspections, investigations and reviewed building plans for to ensure compliance. They were also expected to respond to fire emergencies.

Discussions of paid versus volunteer continued, but it wasn’t until 1995 when the “First 15” professional firefighters, EMT’s and paramedics were hired by the City. These 15 did not end the volunteer service, rather worked with volunteers. The 90s also proved the need for a fire training academy. A program was created, and certification began at an existing station. And the City graduated its first class in 1999.

After 35 years of volunteer service, in 2004, the Coral Springs Fire Department became a fully paid workforce. Another remarkable move was the acquisition of service to the neighboring city of Parkland. Parkland elected to disband its own public safety division and contract its fire suppression and EMS services with the City of Coral Springs. This expanded the department to three additional stations.

Coral Springs has been training firefighters since the inception of the department. As a volunteer department, it was crucial to have a robust training program to prepare recruits to protect the community. The success of training volunteers grew into a vision, becoming the Coral Springs Fire Academy (CSFA). Which soon became the only educational institution in the State of Florida to offer every course required to become a firefighter within one academy. CSFA was run out of the old station 71 until 2007 when the new training center was built. Now known as the Coral Springs Regional Institute of Public Safety (CSRIPS) their “Commitment to Excellence” has succeeded in training thousands of firefighters, EMT’s and Paramedics over the past twenty years. CSRIPS is the only accredited institution operated by a Fire Department and was ranked the number 1 Fire Academy in the State of Florida(2017). It is the only training center to be recognized 4 times as the training and education provider of the year. Now, the Coral Springs-Parkland Fire Department is one of 24 departments that make up the Urban Search and Rescue Task Force 2, based in south Florida. The team is designed to respond to a variety of disasters, including earthquakes, hurricanes, typhoons, storms, tornadoes, floods, dam failures, technological accidents, act of terrorism and hazardous material emergencies.