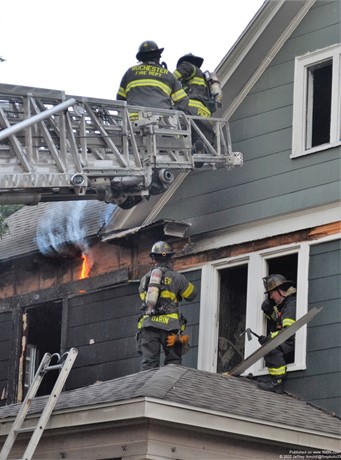 Photo by Jeffrey Arnold/@firephoto25House fire on Shelter Street in Rochester.

ROCHESTER, NY - On Monday, August 15th at 7:20 P.M., the Rochester FD received multiple calls reporting a house fire at 235 Shelter Street. Companies arrived on scene and found smoke showing from the second floor of a large two-and-a-half story multi-family dwelling. The blaze was brought under control in about 30 minutes, with the fire held to the apartment of origin. All of the building's occupants were able to escape unharmed, but unfortunately one dog did not survive. The displaced residents were being assisted by the Red Cross. The cause of the fire is believed to have been of electrical origin.