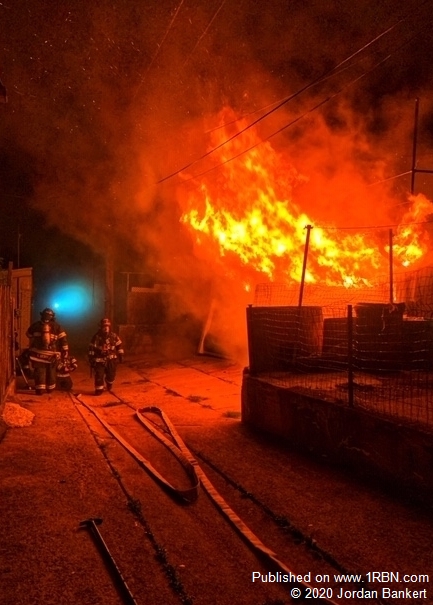 Photo by Jordan BankertFirefighters stretch a hose line down an alley to attack this multiple garage fire in Reading. The fire would extend into other garages before crews got the upper hand.

Reading, PA - Shortly after 11 p.m. phone calls began to come in at the Berks County DES call center reporting a garage on fire in the 500 block of Birch Street. Ladder 3 arrived with a heavily involved garage to the rear of 500 North 13th Street. With companies on the road, the fire rapidly spread into adjacent garages. Firefighters stretched hose lines up an alley off of Green Street to attack the fire. Chief Stoudt (Car 4) established command and advised there was a row of four garages burning. Crews used power saws to force entry into two of the garages to gain access. There was no extension into any surrounding homes. The fire was placed under control at 11:26 p.m. No injuries were reported, the Fire Marshal's Office is investigating.