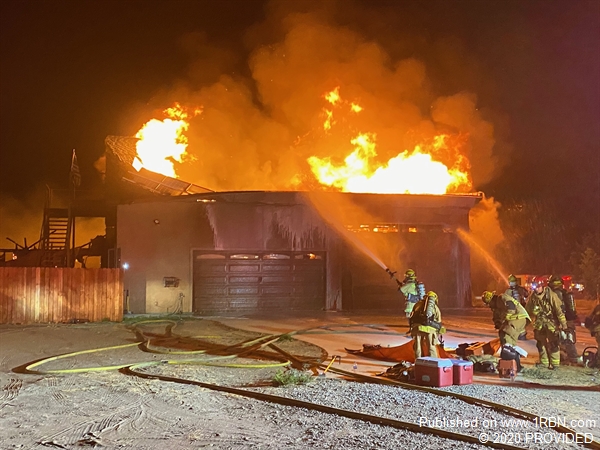 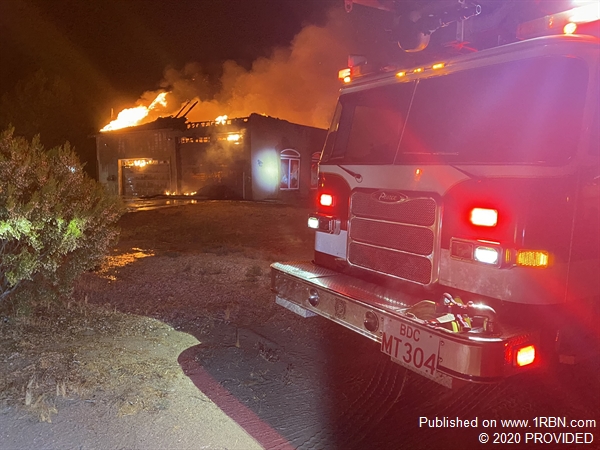 Phelan, CA - At 9:55pm on July 12th, #SBCoFD crews were dispatched to a reported structure fire in the 14400 block of Azalea in the community of Phelan.

First arriving crews found a large, single-story home well involved in fire with multiple exposures to adjacent structures on the property. Crews initiated a defensive fire attack in an attempt to knock down the fire and protect a large RV garage which was imminently threatened.

Crews were transitioning the fire from a defensive to offensive strategy from an exterior patio when a portion of the roof collapsed, causing the patio and a portion of the wall to come down. The collapse briefly trapped 4 firefighters. A “Mayday / Firefighter Down” message was broadcasted. Thankfully the crews quickly self-rescued or were assisted from the under the patio. The firefighters were quickly assessed and treated by an awaiting SBCoFD Medic Ambulance. Two were treated on-scene for minor injuries, but weren’t transported. Two firefighters sustained moderate injuries and were transported to an area trauma center for treatment. They were released this morning to recover at home.

While fighting the fire, crews found what appeared to a large marijuana grow inside the home and garage. Due to the large volume of fire, collapse and unknown hazards crews switched to a defensive posture. The fire was ultimately knocked down in approximately 1 hours. Damage to the home and garage were extensive. No immediate fire hydrants were in the area, making consistent water flow a challenge. A water shuttle operation was used to keep water flowing.

Due to the structural integrity of the home being compromised and hazards inside, a SBCoFD Dozer was utilized for mop-up operations.