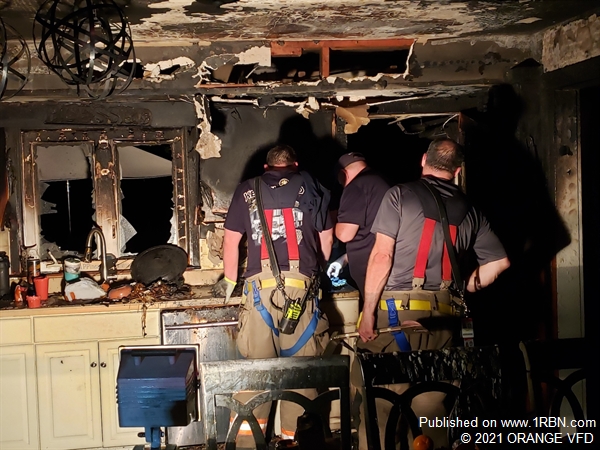 ORANGE, Conn. – An unattended candle is suspected of causing a fire late Sunday night at a home in Orange. There were no injuries.

Members of the Orange Volunteer Fire Department were called to 517 Grassy Hill Road shortly after 10 p.m. Sunday, said Fire Chief Vaughan Dumas. First arriving firefighters reported heavy smoke and fire in the rear of the home. Firefighters located the blaze in the kitchen.
They quickly extinguished the fire and held major damage to the kitchen area. The entire home, however, suffered significant heat and smoke damage.

Fire Inspector Joe Taylor, who investigated the fire, says it appears that a candle left unattended in the kitchen caused the fire.

“Leaving a candle unattended, even for a minute or two, is very dangerous,” said Taylor.

“From 2014 to 2018, the last period during which statistics were collected, candles caused about 7,600 structure fires across the country. Those fires caused an average of 81 deaths per year and 677 injuries.

“These folks were lucky,” continued Taylor. “There were no injuries and firefighters were able to make a good stop. We have more information about candle safety at our website, https://www.orange-ct.gov/771/Fire-Marshals-Office.”
Dumas estimated damage to be about $150,000. He added that the home was equipped with smoke detectors that did activate.

The Woodbridge Fire Department stood by in case of another incident and EMS personnel from American Medical Response were at the scene in case of a medical emergency.