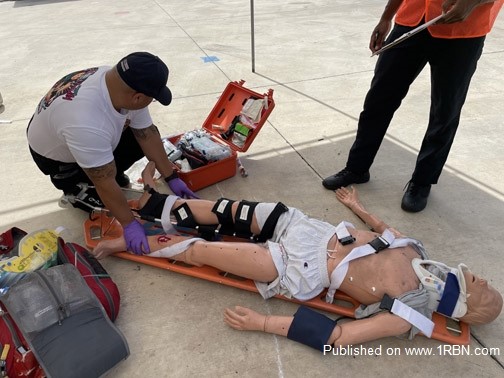 Photo by JOEL GORDONBLS before ALS: A competitor in the Michael Haygood, ALS Competition performs BLS skills on a “patient” during the preliminary competition held at the Coral Springs Public Safety Training Facility. 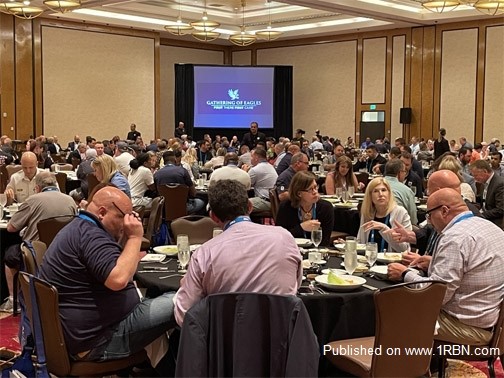 Photo by JOEL GORDONBreaking bread: The large contingent of Eagles take a break from their rapid fire, intense Gathering of Eagles program for some well-deserved lunch. 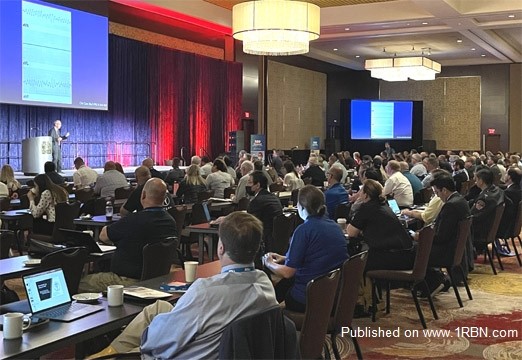 Photo by JOEL GORDONPacked house: This year’s Gathering of Eagles, as part of the 25th Annual First There First Care Conference, held at the Seminole Hard Rock Hotel and Casino, in Hollywood, Florida, was attended by more than 1,000 EMS personnel, Emergency nurses, and EMS Medical Director’s from across the globe. The two-day Eagles program has become legendary for their format and industry guiding topics. 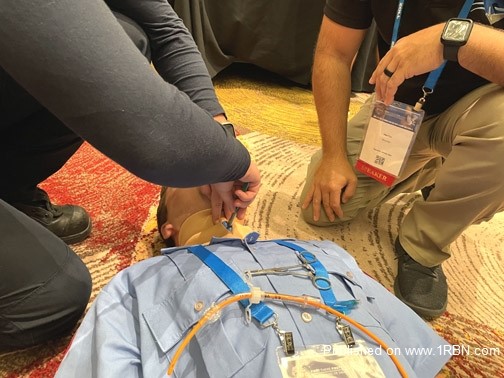 Photo by JOEL GORDONLive Chrychs! Crickey! Not Really. Thanks to 3D printing, participants in the Advanced Airway H.O.T. class were able to practice crycothyrotomies on live subjects. 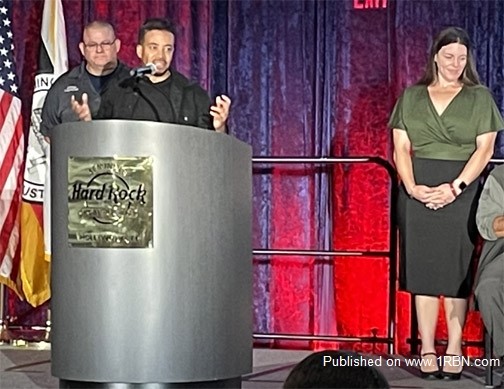 Photo by JOEL GORDONA true survivor: Dionny Baez tells his story of survival to the Eagles, as a victim of a boating collision where field transfusion of whole blood and quick action by paramedics are credited with saving his life. 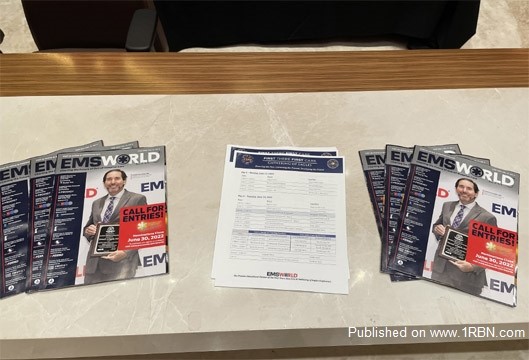 Photo by JOEL GORDONCover Guy! Dr. Ken Scheppke, Florida’s Deputy Secretary of Health was featured on the cover of EMS World, at the First There First Care Conference. He was named EMS Medical Director of the Year. EMS World served as the Premier Media and Education Partner for First There First Care & Gathering of Eagles. Select content from the conference is available for online CEUs on their website. Dr. Scheppke provided the keynote address at the Conference.

Hollywood, FL: June 17, 2022: “I didn’t want to have to drive to Orlando to attend an EMS conference,” said Dr. Wayne Lee, the visionary behind the First There First Care & Gathering Eagles conference which wrapped up its 25th anniversary program on June 17th.

In 1996 the predominantly County-run EMS system was divided into several separate Cities. The system received much criticism from local media regarding inconsistencies in care from one City to another. Dr. Lee, who was serving as the medical director for several of Broward’s fire rescue agencies was looking for a way to unify the various systems.

“Clin-Con was a great program,” explained Lee. “And it still is. However, we needed something local that was convenient for everyone here to participate in, didn’t have to travel long distances, or commit hours of time off and limited budget dollars.”

Humble roots:
Lee’s vision of bringing Broward’s Fire Rescue agencies together began with a simple luncheon held at the Carolina Club in Margate. “Let’s bring everyone together,” stated Lee. “We can talk about where we are now and where we want to go in the future.” After a successful start it was decided the concept would continue. The following year it was moved to a larger venue where guest lecturers and presentations regarding the latest in EMS related concepts were also added. Nova Southeastern University, in Davie, hosted the first “full-fledged” conference.
While the First There First Care conference was developing its foundation, a small group of EMS providers, including North Lauderdale Fire Chief, Rodney Turpel and Medical Director, Dr. Antonio Gandia were conducting ALS competition exercises in the backlot of University Hospital in Tamarac. “The idea,” according to Dr. Gandia “was to prepare Broward’s competition teams to do well at other regional competitions. So we developed our own, small version right in our own backyard,” he explained.

After a couple of years the two events combined into a two-day program which featured the ALS competition on day one and the EMS conference on day two.

On the verge:
The combined events, now known as the First There First Care EMS Conference and Michael Haygood ALS Competition had developed a successful track record of attendance and participation. After a three-year stint at NSU the conference moved onto Broward College. Then it began traveling to various hospitals and other locations across the County. However, attendance and interest in the programs began to fade. “At one point we felt as if it had run its course,” said retired Chief, and current committee chair, Bruce Caruso. Several efforts were undertaken to try to boost interest including adding a third day with an Extrication competition. Caruso explained that despite those efforts the program seemed to be losing steam.

The outside funding allowed the conference planners to entice nationally recognized speakers as well as seek a permanent home. A steering committee was developed under the Fire Chiefs Association. In an effort to broaden the interest levels the committee recognized the need to integrate the greater emergency medicine community and opened its doors to emergency room nurses. The theme for that first combined year was “Bridging the Gap: From the Streets to the ED.”

A trade show was added. The addition of sponsors and vendors helped boost the program financially. Slowly the conference began to regain traction. As part of the growth, the discussion about needing a larger venue came into focus. Don DiPetrillo, a veteran of Broward’s fire rescue systems and Chief of the Seminole Tribe of Florida suggested considering the Hard Rock Hotel and Casino in Hollywood. The location would make a great destination site and could attract visitors from outside the area. This initiative gave the conference a high-profile backdrop and brought both events under one roof.

Tide changer:
That same year the committee secured Dr. Ed Racht, a member of the Eagles Coalition as the keynote speaker. The Eagles were a large association of municipal medical directors with an international following. After attending the conference Dr. Racht saw tremendous potential in the program. “There was something special about it,” recalls Racht. “The name, First Care had true meaning. After all isn’t that what we do? We care for people,” he said during an interview. The following year he brought in Dr. Paul Pepe, the founder and coordinator of the Eagles. Over the next couple of years several more Eagles were invited speak at the conference including local Pediatric Emergency Physician, Peter Antevy who would go on to develop the Handtevy emergency pediatric dosing program.

Partnership raises the bar:
As if the planets aligned, the Eagles, which were originally centered at the University of Texas, were searching for a new home. What better place to relocate then South Florida? Despite having to cancel the program in 2020 due to the Covid-19 pandemic, in 2021 the First There First Care conference reconvened with a new partner; The Gathering of Eagles. Members of the Eagles coalition from across the globe traveled to or “Zoomed” into South Florida to attend the conference. The conference itself had now grown to two days and with addition of the Eagles program, totaled four days.

This year First There First Care and the Gathering of Eagles established a full partnership which expanded the program to six full days including the Michael Haygood Advanced Life Support competition, which featured 25 preliminary teams on Sunday and a finals portion on Tuesday, with the top seven teams competing in the finals.

Attendees from across the United States as well as several foreign countries including the United Kingdom, Ireland, Columbia, and Saudi Arabia were in attendance. The conference footprint spread across three separate venues; The Seminole Hard Rock Hotel and Casino, the near-by, Le Meridian Hotel in Dania Beach, and the Coral Springs Public Safety Training Facility. Attendance was estimated at well over 1,000. Wednesday evening featured a 25th anniversary gala and the annual Fire Chiefs’ EMS awards ceremony. The trade show also grew to more than 80 vendors. And, for the first time, the State Office of EMS moved their quarterly meetings to the conference as well. For those who could not attend, the conference committee partnered with EMS World as the premier educational and media partner of the conference. EMS World is providing the recorded presentations, online, in individualized formats. CEUs are provided for the online training.

Quarter Century and stronger than ever:
What began as a simple concept to bring a group of EMS providers together to share interests and develop common strategies in a convenient, no pressure environment has evolved into one of the largest, best recognized emergency medical care programs in the Country.
“Broward County has always been on the leading edge of developments in EMS,” said Julie Downey, Chief of Davie Fire Rescue and president of the Fire Chiefs Association of Broward County. “First There First Care & Gathering of Eagles is just one more example of the commitment and dedication our people display every day, for the benefit of our citizens.”