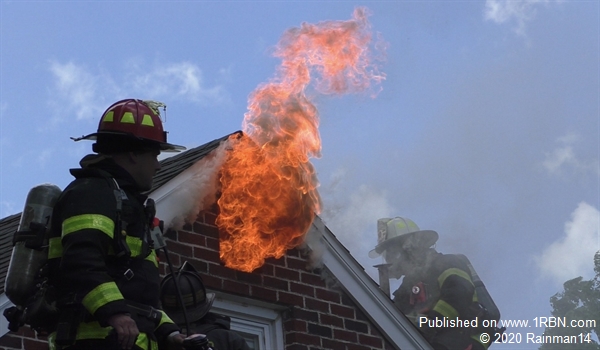 Photo by Rainman14Firefighters operate outside the house as crews made the push to extinguish fire in the attic. 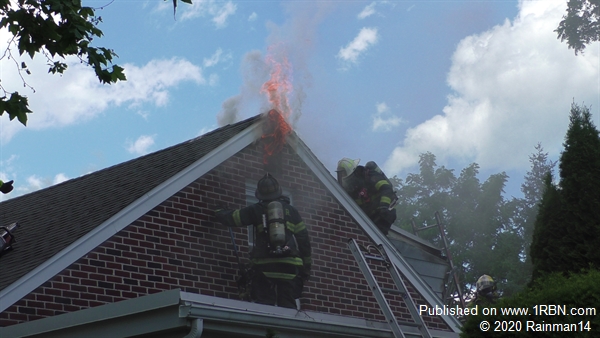 Berks DES notified responding crews the additional that a carport attached to the house was on fire. Captain 66 arrived within minutes and found heavy fire showing from the rear of a house. After declaring a working fire, Captain 66 took command and requested the first-in engine to lay into the scene. Captain 66 stated that everyone was reported out of the house.

Engine 66 laid in from the hydrant at S. Temple Blvd. and 6th Ave. As crews stretched lines to the rear of the house, Engine 13 connected the five-inch line to the hydrant and supplied Engine 66. Shortly after arrival crews had two lines in service knocking down the fire. Both Leesport and West Reading’s Rescues were dispatched to the scene as cover units.

As additional manpower arrived, crews began searches and stretched an additional line to take inside the house. Firefighters found the fire made it into the house and began shooting out of the eaves on the 'Delta' side. Crews brought the line up to the second floor where the line was charged. Crews were able to knock down the fire in the cockloft area as firefighters on the roof began vertical ventilation.

FM 66 was requested to the scene to investigate. The fire was placed under control with overhaul at 3:32 P.M. Firefighters continued to work for over 30 minutes before command started releasing units.