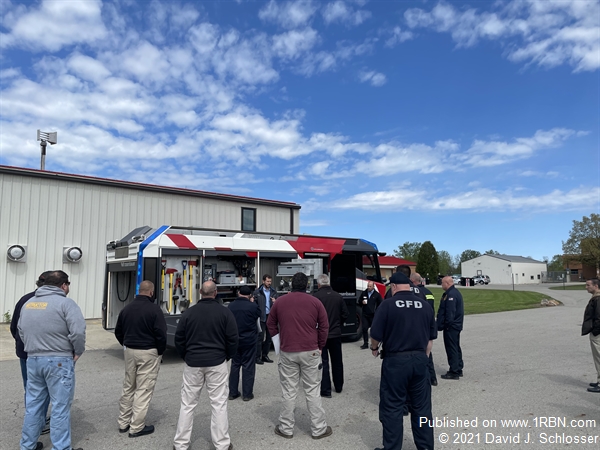 Photo by David J. SchlosserFirefighters from across Ohio inspect the world's first electric fire truck at the Ohio Fire Academy. 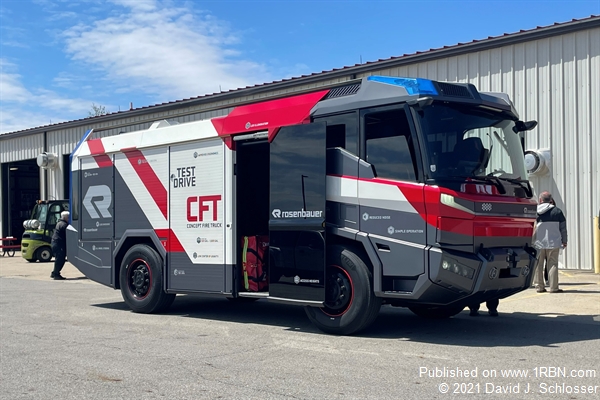 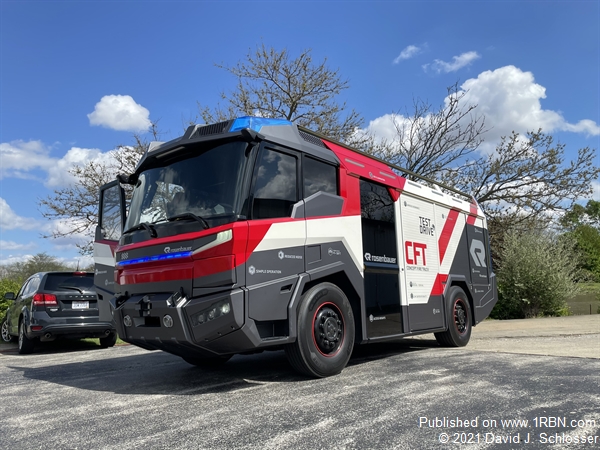 REYNOLDSBURG, OH – The Ohio Fire Academy was the site for Ohio Rosenbauer Concept Fire Truck (CFT) ride and drive event on Tuesday, May 11th. More than 40 firefighters from across state had the opportunity to see the fire service’s first specific hybrid/electric powered fire truck built by Rosenbauer and sponsored by All American Fire Apparatus. The Ohio Fire Academy was the perfect location for the participants to drive the CFT and put it through its paces as they learned about the performance and benefits of electric powered vehicles.

Many of the firefighters who drove the CFT were amazed by the quick acceleration of the smooth and quiet motor when compared to that of a diesel engine. Other features of the CFT include a wide-open cab that allows firefighters room to move in the cabin with an unobstructed view through the front windshield. Space once occupied by an engine tunnel and doghouse can be configured for various seating options and equipment storage. Another notable feature was the body configuration, which provided plenty of storage and access of compartments from the ground, as well as low cab entry.

The CFT also features a diesel engine that is used to extend the range of the batteries and can charge up to 150kW when needed. When used in the city, the batteries are used for driving much like that of a hybrid car, but when they run low, or need to extend the range, the diesel engine will come online and charge the system. The production version will be capable of carrying up to 1000-gallons of water and powering fire pumps up to 1500-GPM. In addition, the driver and officer utilize touch screen controls that monitor the performance of the truck as well as link to the internet for real-time information, directions, and access to the cloud.

Those who attended the event were provided a catered lunch and opportunity to look into the future of firefighting.