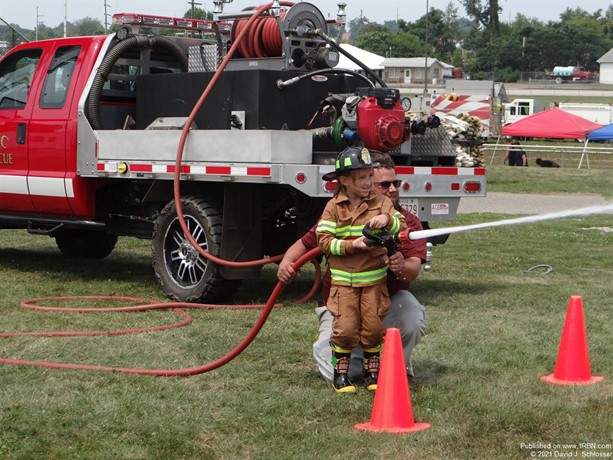 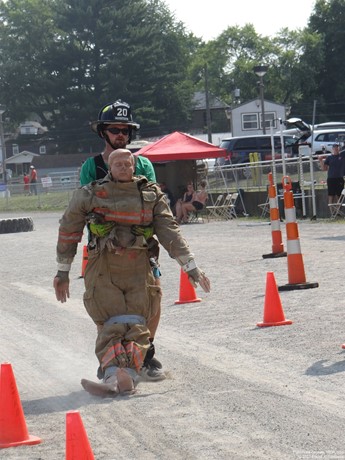 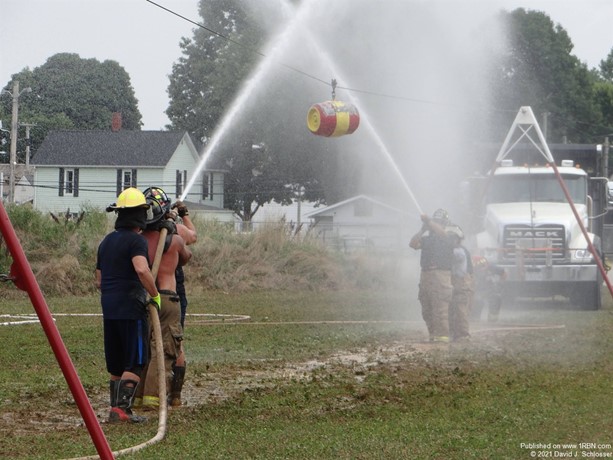 Photo by David J. SchlosserStrasburg and Canton Firefighters battling it out during the water barrel competition. 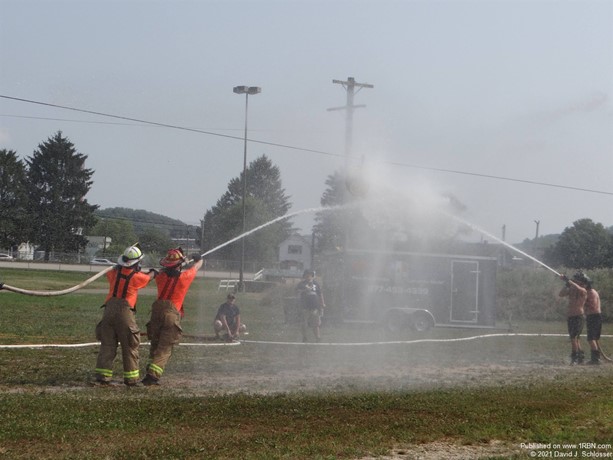 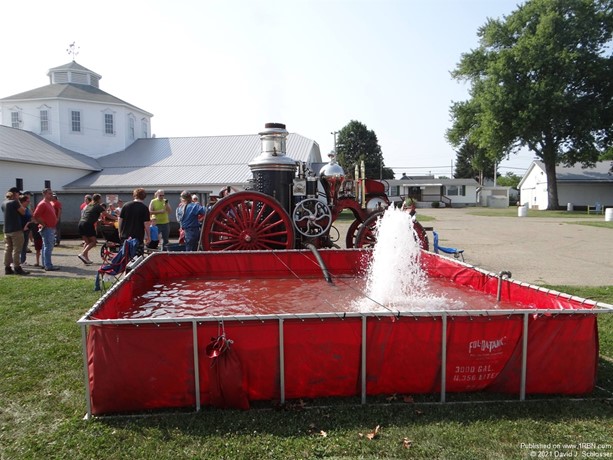 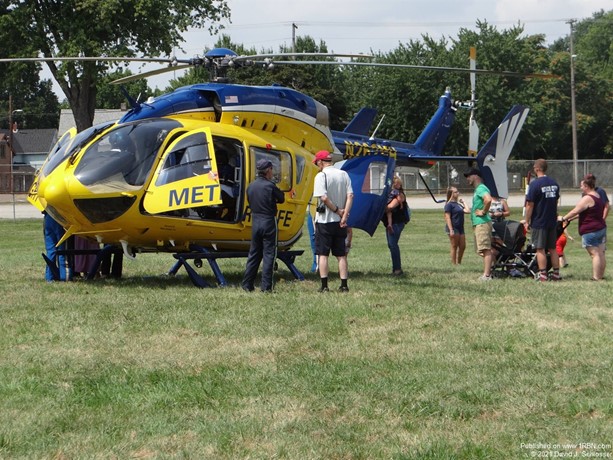 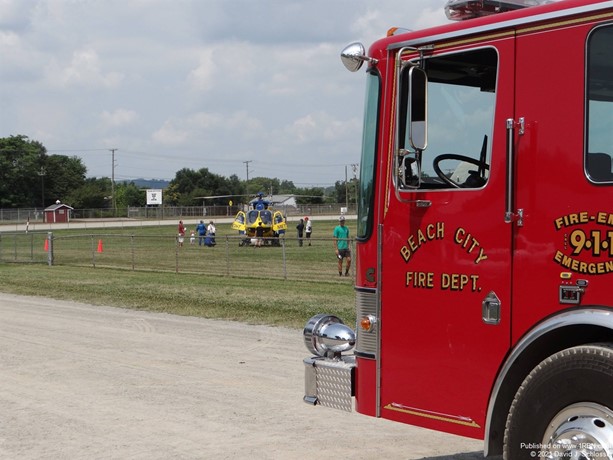 DOVER – Saturday, August 7th marked the return of the Second Annual HRN Firefighter Field Day Challenge at the Tuscarawas County Fairgrounds in Dover after the cancellation of the 2020 event due to COVID-19 concerns. The event kicked off at 9:30am with the presentation the colors and singing of the national anthem by Jalen Berry of Coshocton. Jeff Mizer of Mizer Marketing and Don Gatti of HRN Construction and Restoration were the Master of Ceremonies for the day and spoke about the charities that have benefited from the event.

For the Combat Challenge, firefighters had to run an obstacle course that included dead blow sleds, 50lb donut roll hose hoist up Canton Township Fire Departments mobile 4-story training tower, hose pack carry, rescue dummy drag, and charged hose drag, all while wearing a weighted vest and weights. Several of the participant in the challenge competed the day before at the Scott Firefighter Challenge at the Fire Department Instructors Conference in Indianapolis. The timed event had two age groups and was a crowd favorite throughout the day. It should be noted that the temperatures in the 90s with very little shade and everyone who competed were champions! The top four in the 35 and under category included, Brian Collins, Canton 1st place and Aaron Rich in second, both Canton firefighters, third place went to Chris Sturtz from the West Licking FD, and fourth place went to ben Weaver of the Paint Twp. FD. The 35 and over category winner was Barret Piper of the West Licking FD, Marvin Miller from the Baltic FD in second, Stephen Rich of the Canton FD finished in third, and Doug Moore of the Carrollton FD rounded out the ranking in fourth place.

The overall fire department ranking was based on the individual firefighter results and department team scores and were assigned a point value to determine overall rankings. The department that is the recipient of the traveling golden ax award this year is the West Licking FD. The Canton City FD took second place, Baltic FD captured third place, and Paint Twp. fought their way into fourth place. The spirited and friendly competition highlighted the bond of brotherhood as everyone encouraged participants throughout the day to do their best. Regardless of ability or event time, every participant was cheered on and congratulated upon completion.

Other highlights of the day included a Junior Firefighter Combat Challenge obstacle course where children up to 12 years of age could don child sized turn-out gear and navigated a course that included a pipe, rescue carrying large teddy bears, tire flip and ended with a live hose line where they extinguished flames in a plywood house. Ted and Susan Elder brought their 1869 Amoskeag steamer and ran demonstrations throughout the day. Ther Amoskeag steamer had previously served Manchester, New Hampshire which was also the home Amoskeag Manufacturing Company.
There were also two helicopter landing zones set up for displays, but due emergencies, The Cleveland Clinic Critical Transport and Medflight were unable to attend. However, Cleveland Metro Lifeflight 3 based at the Wayne County Airport arrived and spent extended time on the ground for the many visitors who wanted to explore their Airbus EC-145 Eurocopter and visit with the crew.

The Firefighter Field Day a 501C3 charity which donates proceeds to various charities. This year’s event raised over $13,000 which was distributed to the Akron Children’s Hospital burn camp for children, United Way, and Community Hospice. As the event drew to a close planning was underway for the 3rd Annual HRN Firefighter Field Day which will be held June 11th, 2022 at the Tuscarawas County Fairgrounds in Dover. You can also check their Facebook page, @FirefighterFieldDay for information and updates. For further information sponsorship or competing in next year’s event, contact the event committee at 330-432-6706 or by email at info@firefighterfieldday.org.