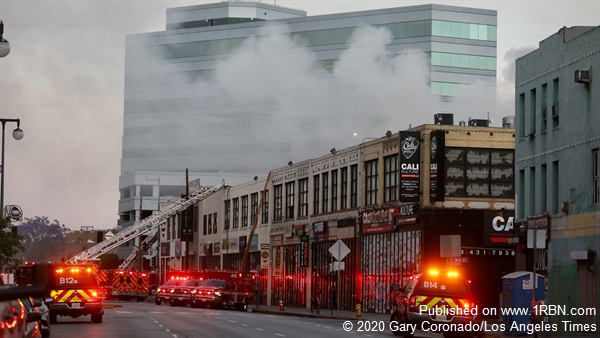 Los Angeles, CA - Firefighters were inside a downtown Los Angeles business that was on fire Saturday evening, May 16th, when a huge explosion hit, injuring 11 first responders and raising questions about the cause of the blast, fire officials said.

The explosion damaged several storefronts, melted fire helmets and left one fire truck burned and covered in debris. Officials said the firefighters had to pass through the fireball to escape.

"Firefighters were coming out with obvious damage and burns," said Erik Scott, a spokesman for the Los Angeles Fire Department.

An initial investigation of the scene identified the business as Smoke Tokes, a warehouse distributor with supplies for butane hash oil, he said. The cause of the fire has not been determined.

Firefighters first received a call about 6:30 p.m. about a structure fire in the 300 block of Boyd Street south of Little Tokyo.

While firefighters were inside attempting to find the source of the blaze, there was "a significant explosion, very high, very wide, rumbling the entire area." Some other firefighters were on the roof of the building when the blast occurred.

LAFD Chief Ralph M. Terrazas said the firefighters responding to the fire call sensed something was wrong inside the building but could not escape before the explosion.

Initially, officials could not account for all the firefighters.

In an LAFD radio transmission, an official is heard screaming, "Mayday! Explosion! I have two down firefighters."

"When one of your own is injured ... you can imagine the amount of mental stress," Terrazas said. "A lot of our firefighters were traumatized."

Eleven firefighters were receiving treatment for burn injuries, Scott said. All were taken to County-USC Medical Center. At a news conference at the hospital late Saturday night, Mayor Eric Garcetti said three of the firefighters sustained critical but not life-threatening injuries.

They ran "straight through that ball of flame to get to safety across the street," said Scott.

All were expected to survive. Doctors at USC said one of the firefighters would likely need skin grafts.

The fire broke out in an older business district off East 3rd Street known for its various smoke shops.

Officials said butane was found in the building but stressed it's still not clear what caused the blast.

"The cause of the fire remains of paramount concern and remains under active investigation," Scott said.

Jeralyn Cleveland was celebrating a family birthday party on the roof of the 13-story apartment building she manages three blocks away when she saw the explosion.

"Everyone in my building thought there was a bomb that went off," said Cleveland, 37. "It was like a mushroom."

Cleveland said there are small fires all the time in the neighborhood, which borders skid row, but she had never seen anything like this before.