Photo by EFDThe Captain headed in 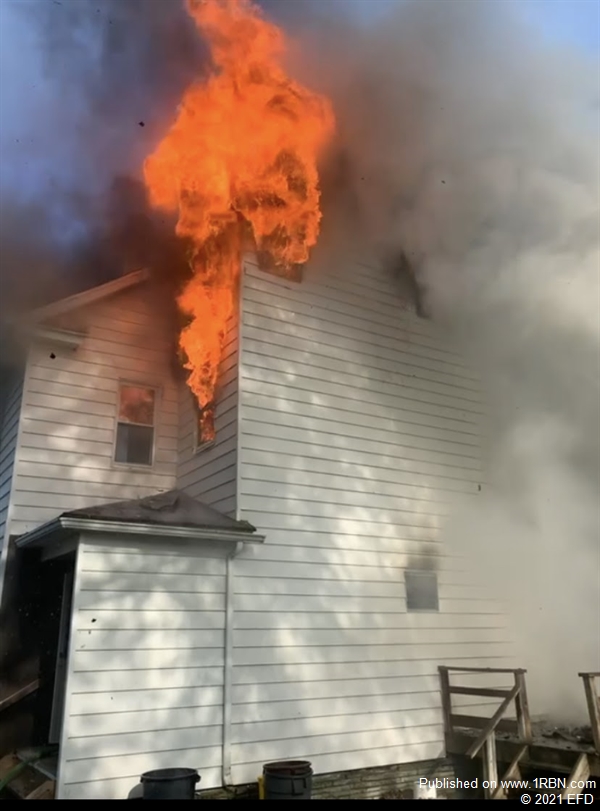 ENDICOTT, NY-May 11, 2021 8:03 am. Endicott firefighters were requested to Parsons Ave for a building fire. Chief 25A arrived to find heavy fire on the 1st floor left side apartment of the 2 1/2 story, three apartment building. He immediately requested a second alarm, summoning EFD off duty personnel and neighboring mutual aid fire departments. On duty Platoon 2, under the direction of Captain Paul Higgins, arrived shortly after 25A. The crews from Quint 25 and Squad 25 quickly established a water supply and initiated an aggressive interior fire attack. Due to the age of the building and type of construction, fire quickly made it into the attic and void spaces. Crews worked tirelessly for hours to find and extinguish all of the fire. According to neighbor's reports, the fire burned for approximately 15 minutes prior to being reported. That timeframe caused the sleeping residents of the apartment to be trapped on the second floor. These residents made their way to the fire escape and the front porch where they escaped. EFD crews rescued a resident who was still in his apartment next to the fire apartment. Crews from Vestal Fire Department, Union Center Fire Company Inc., West Corners Fire 29, Endwell Fire, Five Mile Point Fire Company, assisted at the scene while West Endicott Fire Department stood by in quarters. In all, seven people were treated by Union Volunteer Emergency Squad, Inc. with four being transported to local hospitals for minor injuries. No firefighters were injured. Endicott Municipal Light arrived on scene quickly to cut power at the building and the neighboring area to allow the firefighters to work safely. Endicott Water also assisted at the scene. Broome County Office of Emergency Services supplied fire coordinator staff and Endicott Police Department provided traffic control and assistance on the scene. The cause of the fire is being investigated by the Broome County Bureau of Fire Investigation.