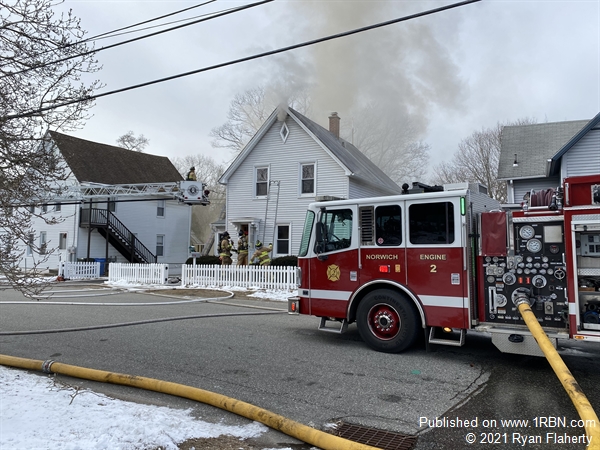 Photo by Ryan FlahertyEngine 2 stopped short to leave room for the truck. 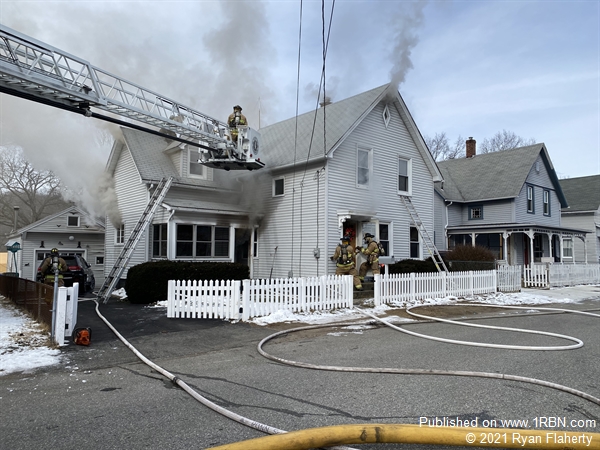 Photo by Ryan FlahertyTruck 1 set up on the 'Alpha'/'Bravo' corner. 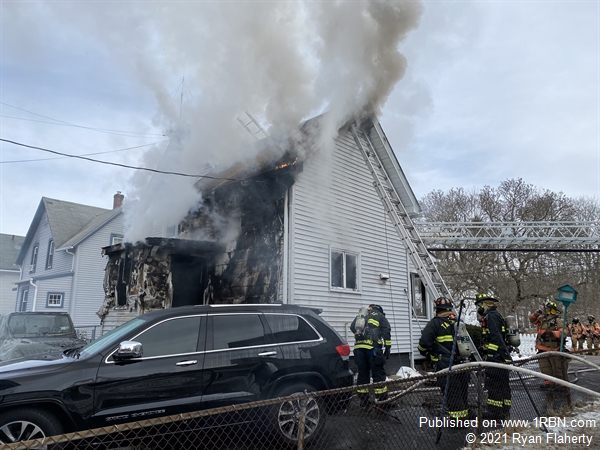 Photo by Ryan FlahertyHeavy fire was venting from the rear on arrival of the initial companies which threatened their garage and jeep. 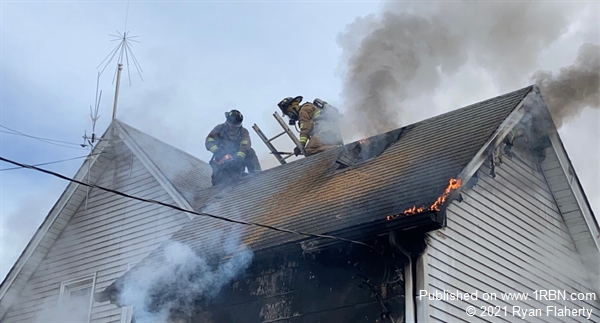 Photo by Ryan FlahertyFirefighters Mathieu and Wetherell preparing to cut another hole.

Greeneville, CT - At 10:16 A.M. on January 31st, the Norwich Fire Department was dispatched to 80 North Street for a dryer fire. While responding, dispatch updated the companies that the homeowner called back stating that the whole room was on fire. At 10:21 A.M., the battalion saw the header and staged the second-alarm companies on Boswell Avenue.

Engine 2 arrived at 10:22 A.M. with heavy smoke showing from the rear of a two-and-a-half story wood-frame residence. Engine 2 took a one-and-three-quarter inch hose line around to the rear of the house where fire was coming out of four windows and a doorway extending up into the second floor, as well as threatening a garage and Jeep.

The crew washed down the exterior as the fire rolled into the soffit. They then proceeded into the first floor, where they encountered the kitchen that was well involved. Squad A stretched a one-and-three-quarter inch hose from Engine 2 into the first floor from the front porch and began suppressing fire. Engine 3 laid in from a hydrant on North Street, which supplied Engine 2. Engine 3’s crew then forced the front door and stretched a line to the second floor where they found extension running the walls into the attic. Truck 1 set up on the 'Alpha'/'Bravo' corner and flew their aerial to the roof, where they performed vertical ventilation.

Taftville’s Engine 21 opened up the gable vent on the 'Bravo' side which had fire coming from it and then operated a line on the exterior. Yantic’s Engine 33 and East Great Plain Ladder 5 assisted with overhaul on the first and second floor. Rescue 5 provided the cascade and filled cylinders on scene. The Mohegan Tribal Fire Department provided the FAST. The Norwich Fire Marshal’s Office is investigating.