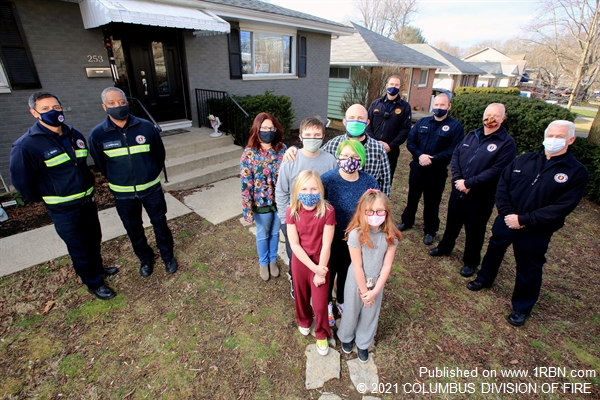 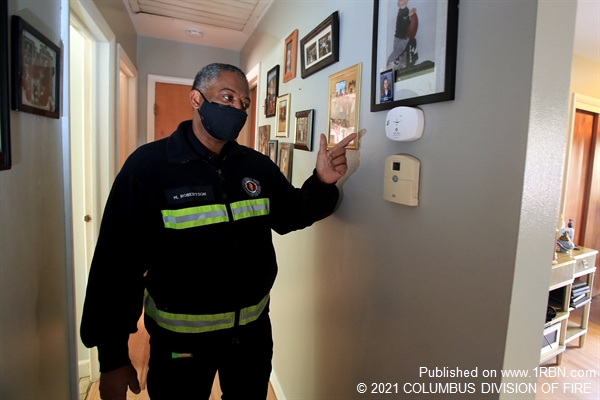 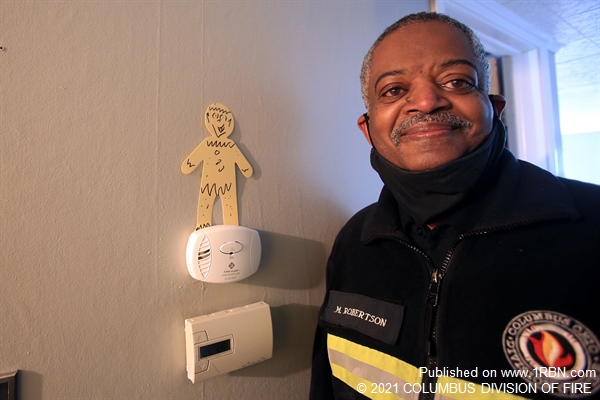 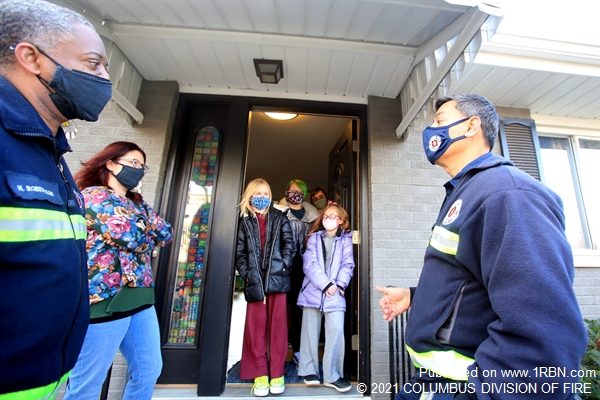 Columbus, OH - Carbon monoxide is an odorless, colorless gas that can kill you. It knows no season.

The family of Scott Duffy and Shalana Slark and their four children had just moved into a Clintonville home on Girard Road in December after spending weeks renovating the split level ranch. They called the Columbus Fire Prevention Bureau and requested new smoke and carbon monoxide (CO) detectors. They didn’t know it at the time, but the call may have saved them from serious illness. Or worse.

“I went to the home with the intent of installing a single CO detector,” said Firefighter Marvin Robertson. Robertson is a 21-year veteran of the Columbus Fire Department and has served 18 months in the Fire Prevention Bureau.

“I met Mr. Duffy, and he was very friendly. He carried a baby in his arms. As I was installing the CO and a separate smoke detector, he mentioned that the kids sleep in the downstairs lower level of the home,” said Robertson.

“When I heard that, I went to the truck and got another detector. We don’t normally put a CO detector in a basement, but since there were kids staying down there, I ended up installing two CO and two smoke detectors in the home,” said Robertson.

Robertson learned the next day that the alarms sounded that very night after he installed them. The family called the fire department and Ladder 24 arrived to investigate the alarms. The responding firefighters found CO levels in the house at 81 parts per million, a level that over time could have caused illness. CO levels above 70 ppm are considered dangerous and can lead to headache, nausea and fatigue. Sustained concentrations of 150-200 ppm can lead to disorientation, unconsciousness and possibly death.

CO fumes are produced any time you burn fuel in furnaces, hot water heaters, fireplaces and gas ranges, as well as cars or trucks, small engines, stoves, lanterns and grills. Building codes require proper venting for CO producing appliances, but it can build up indoors and poison people and animals who breathe it.

According to the Centers for Disease Control, everyone is at risk for CO poisoning. Infants, the elderly, people with chronic heart disease, anemia, or breathing problems are more likely to get sick from CO. Each year, more than 400 Americans die from unintentional CO poisoning not linked to fires, and more than 20,000 people visit the emergency room with symptoms. Over 4,000 people are hospitalized with CO poisoning each year.

“The majority of the CO alarm runs we get are caused by batteries dying in the home detector or by faulty detectors sounding off,” said Captain Andrew Boomstra. Boomstra was the officer commanding Ladder 24 when a call was received by the Fire Alarm Office and passed onto Columbus Fire Station 24, located at the corner of Morse and Karl Roads, about two miles from Girard Road.

Boomstra explained that 911 dispatchers question callers when a CO alarm sounds to determine if anyone in the household is feeling symptoms of CO poisoning. If so, an EMS medic would be dispatched as well as a ladder truck or fire engine for a medical emergency response, with sirens blaring and lights flashing.

“It’s a colorless, odorless gas, so unless someone is feeling sick, the caller has no way of knowing if there’s a real problem with carbon monoxide, or just a faulty alarm,” said Boomstra.

No one was feeling ill at the Duffy home, so when Ladder 24 arrived, the crews carried hand-held CO meters and began their search. They confirmed the high level of carbon monoxide, but after ventilating the home with portable fans from the ladder truck, the crews could not find the source of the gas after checking the furnace and appliances, the usual sources of CO.

“There were kids in the house, and it was just before Christmas. We didn’t want to leave without finding the source. But we were stymied. We usually pin point these things pretty quickly,” said Boomstra.

The crews searched for an hour before asking the homeowner what was operating when the alarm went off. They discovered that the home’s boiler driven heating system was working so well that the family had turned on the whole house fan to moderate the indoor temperature. The whole house fan, which is typically used in summer months, was creating negative air pressure in the house, causing the boiler fumes to be drawn back into the house instead of escaping up the chimney as designed.

“It was about 7 p.m., and the kids had just finished a zoom call with grandma. They were just starting to unwrap some Christmas gifts when one of the alarms went off,” said Scott Duffy.

Duffy, his wife Shalaina Slark and their four school-aged kids had just moved into the home two days earlier, and were only beginning to figure out the heating system. (The “baby” Duffy was holding in his arms when Firefighter Marvin Robertson arrived earlier that day turned out to be one of his daughter’s dolls.)

“I wasn’t sure what to make of it, because the CO alarm was just installed that day. I thought maybe something was wrong with it, but then the second alarm went off,” said Duffy.

Shalaina Slark called the Fire Department’s non-emergency number, then joined the kids who were by then waiting outside in the family minivan, part of the family’s pre-arranged meeting place in case of emergency.

“I couldn’t be happier with the firefighters who stayed to solve the mystery. They told me they weren’t leaving until they figured it out, even if it took all night,” said Duffy. “Carbon monoxide is not something on the forefront of your mind, honestly. It’s not something you think about hurting your family. I’d like everybody to know that if you don’t know the status of CO and smoke alarms in your home, get them checked out,” said Duffy.

The crews of Ladder Company 24, along with the Fire Prevention firefighters Robinson and Jamie Sierra were reunited with the Duffy-Slark family on Saturday, January 9th. The family wanted to thank the firefighters and pose for photos.

Firefighter Robertson took some ribbing for remembering the “baby” in Duffy’s arms during his alarm installation, but he took it all in stride.

“It's a feeling you can’t really explain. You’ve made a difference,” said Robertson, who had installed alarms in five residences that day.

“The little bit of time we spent with these folks might have changed their lives,” said Robertson. “I’m glad we can make a difference.”

To request a free smoke alarm or carbon monoxide alarm, residents of Columbus can call the Columbus Division of Fire Smoke Alarm Hotline at 614-724-0935.