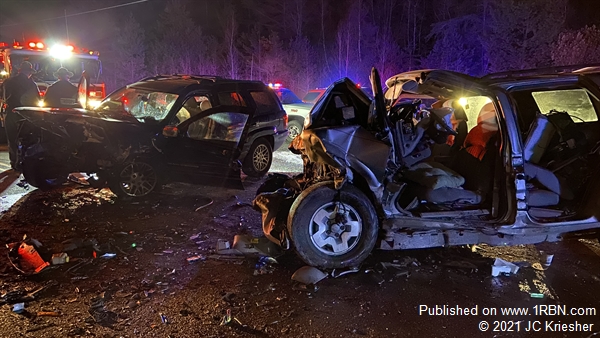 Photo by JC KriesherIt took rescuers nearly 30 minutes to extricate the driver of the vehicle on the right. Both drivers were flown to a trauma center with serious injuries.

Luzerne County, PA – At 6:00 P.M. on Tuesday, January 18th, Schuylkill County 9-1-1 dispatched Fire District 19 (Nuremberg-Weston) to 1564 Tomhicken Road in Black Creek Township. Firefighters arrived on the scene in Engine 19-10 and Squad 19-60 to find a two-vehicle head-on collision, with both drivers still in the vehicles.

Personnel found one driver to be unresponsive, popped the door and were able to quickly extricate to EMS. Crews found the second driver was trapped under the dashboard, but conscious.

Command requested Sugarloaf Rescue 177 be added to the incident and two helicopters to respond to the scene. Sheppton-Oneida Engine 9-10 was sent to the Nuremberg Park for the landing zone.

Firefighters removed both doors on the driver’s side and began to lift the dash to extricate the patient. After working for nearly 30 minutes, the driver was able to be pulled from the wreckage.

Sugarloaf EMS and McAdoo EMS transported both patients with medics from Medic 11 and Medic 26 to the Nuremberg Park where they were flown to Geisinger Medical Center in Danville via MedEvac 4 and LifeFlight 6.

Fire crews remained on scene until 10:00 P.M. as State Police investigated the crash.