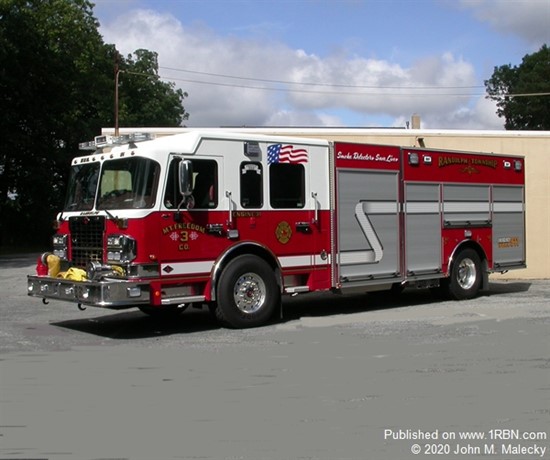 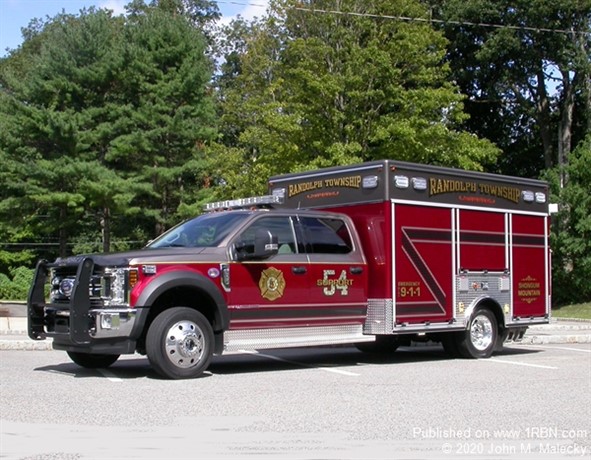 Photo by John M. MaleckyShongum Mountain FC of Randolph Township placed in service Support 54, a 2020 Ford F-550/EVI which has a 6.5 kw generator. It was sold by Campbell Supply Co., LLC. 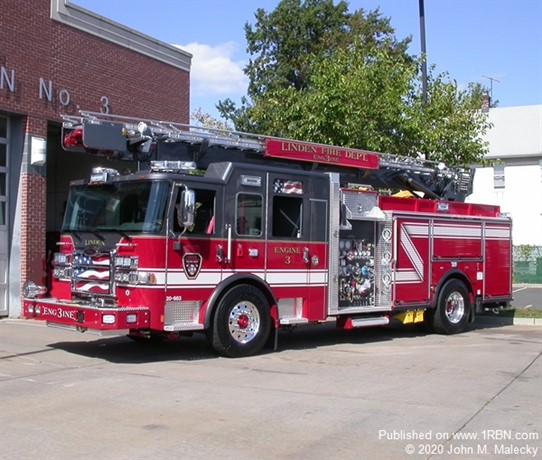 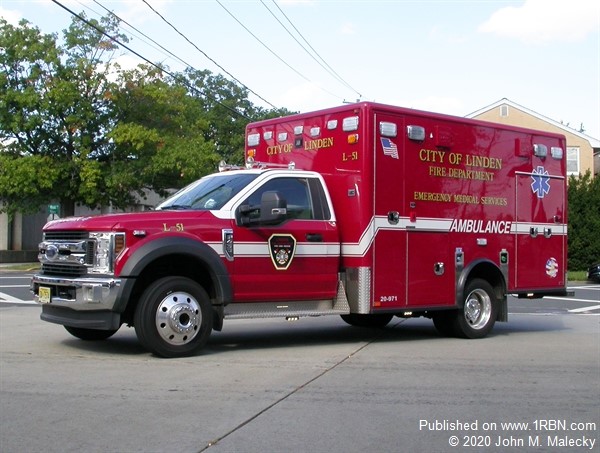 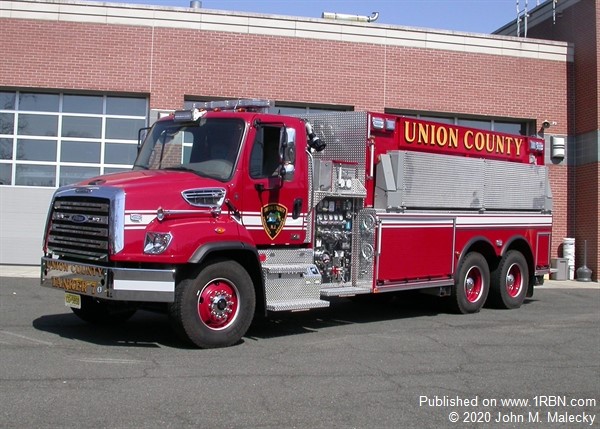 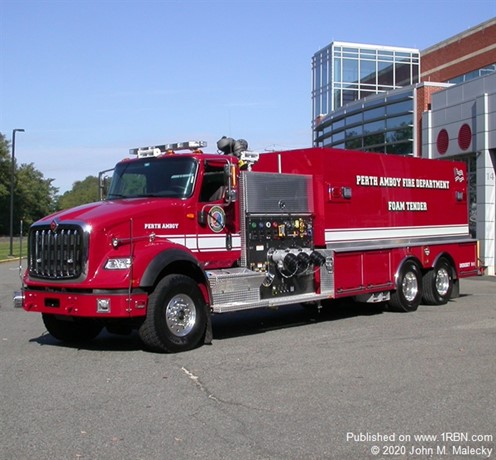 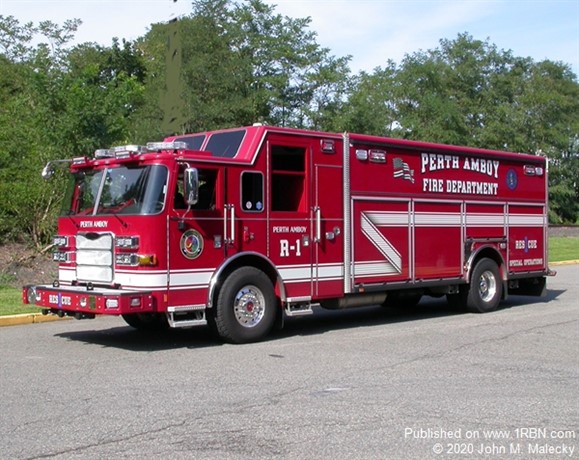 (Author’s note: In last month’s column there was a typo on the generator size of Hamburg’s Rescue 1. It should have read as a 35 kw instead of 325.)

This month we explore some apparatus from suburban and urban departments. Representing a suburban department is Randolph Township in Morris County, featuring a Spartan ER pumper on a Metro Star chassis from Mount Freedom (Company 3) and a support unit from Shongum Mountain (Company 5) built by EVI on a Ford chassis. Next two urban departments represented by a Pierce heavy rescue and a Ferrara foam tender on an International chassis, both in Perth Amboy in Middlesex County, and a Horton ambulance, a Pierce pumper with telescoping waterway and a Pierce pumper/tanker on a Freightliner chassis in Linden (Union County). A couple of quick notes: the foam tender in Perth Amboy has no water pump. It has a Fire Lion Model FP2-175 auxiliary foam pump rated at 135-235 GPM and a UPF 4000-gallon foam tank with Universal Gold foam. There is also a Foam Pro Series 3150 System which meters foam for discharge. Essentially this vehicle is fed water in order to deliver finished foam through the discharges or through its TFT Magnum EXM monitor. The “3150” has no relation to any water or finished foam discharge. It is just a part number. Pumper/tanker in Linden was bought by Union County and although it is quartered and manned in Linden, it is subject to respond throughout the county and beyond for mutual aid if needed. The Linden chief told me that it had been dispatched to Jersey City in Hudson County not too long ago on mutual aid.

The P.O.L. (Property Owners League) Fire Company (No.2) in Wayne Township (Passaic County) reports that they have taken delivery of a new pumper built by Toyne Fire Apparatus. It has heir newly adopted color which is Spartan silver metallic over Spartan red. Their former color was lime yellow. It is their second Toyne pumper. Specs include a Gladiator LFD chassis with 10-inch raised roof cab, Cummins ISX 12, 500 hp diesel engine, Hale Qmax 1500-GPM pump, UP{F 750-gallon water and 75-gallon Class “B” foam tanks, Hale Foamlogix 5.0 foam system, ROM roll-up compartment doors, enclosed ladder and pike pole storage, three crosslays (two 1 ¾ and one 2 1.2-inch), ¾ booster reel at rear, back up camera, Onan 10 kw generator electric cord reel and Whelen and FRC scene lighting. They also tell us that they have had a pre-construction meeting with Toyne to replace their 2001 Spartan/American LaFrance/Pierce platform quint. Some may remember that it originally was built with an RD Murray body which was part of American LaFrance and had a Canadian built Nova Quintech platform. However by the time the truck was delivered Nova Quintech was sold to Pierce, hence the Pierce name came into play. When I photographed it new, it was a mystery truck because it had no manufacturer’s nameplates on it. So apparatus photographers had to name it as it is described here. Currently there is no Toyne dealer in our state.

Emergency Equipment Sales & Service, the HME Ahrens-Fox dealer for our state, reports that HME Incorporated has purchased the remaining assets of the Ahrens-Fox Engine Company which include records, technical drawings and a parts inventory dating all the way back to the early 1900’s. HME Ahrens-Fox is working to build upon the Ahrens-Fox legacy for forward thinking innovations and also has the unique ability to provide parts and technical support to the antique Ahrens-Fox apparatus still in existence. HME Ahrens-Fox has released the AF-1 cab and chassis which is available for the full line of HME Ahrens-Fox pumper, rescue and aerial products. The AF-1 is the first in a series of upcoming products that are being released to pay homage to the Ahrens-Fox legacy. As the HME Ahrens-Fox dealer and service center for New Jersey and eastern Pennsylvania, EES is able to help customers throughout the region to keep these antiques alive and in a lot of cases, use genuine OEM components. EES also has a rescue pumper demo in stock based on the Ahrens–Fox AF-1 chassis and also features the Ahrens-Fox 2000 stainless steel centrifugal pump which is manufactured in-house by HME Ahrens-Fox. EES has received an order from the Ogdensburg VFD (Sussex County) for an HME Ahrens-Fox pumper. Specs include a stainless steel body on an 1871-W chassis with six seat cab having a 12-inch raised roof, Cummins L9, 450 hp diesel engine, Hale 2000-GPM pump, 500-gallon water tank, front intake, six pre-connected attack lines, full height and depth compartments, enclosed ladder storage and a large hose bed with a custom stokes basket and RIT equipment storage area. They have also received an order from the Gloucester County EMS for four Excellance Type III ambulances on Ford E-450 chassis. Specs include Excellance’s 100% welded aluminum body and cabinetry, custom interior layout and Whelen LED warning and scene lights. They have delivered an Excellance custom ambulance to the Florence Township Fire District 1 in Burlington County.

A couple of avid readers have furnished some information on E-ONE deliveries in the southern half of the state: in Gloucester County, Gloucester City received a Typhoon rescue pumper and Deptford received a Cyclone 95-foot platform. Mullica Hill is expecting a twin to it shortly. In Burlington County, Westampton Township received a rescue pumper. In Camden County, Audubon Park received a Typhoon rescue pumper 1500-GPM, 1000-gallon water and 30 A foam tanks and it carries Holmatro rescue tools. In Salem County, Penns Grove received a Cyclone 100-foot rear-mount quint 2000/470/30A and it carries Hurst Tools.