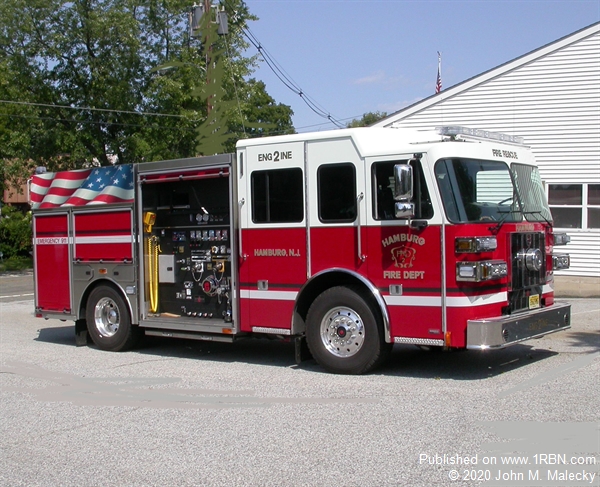 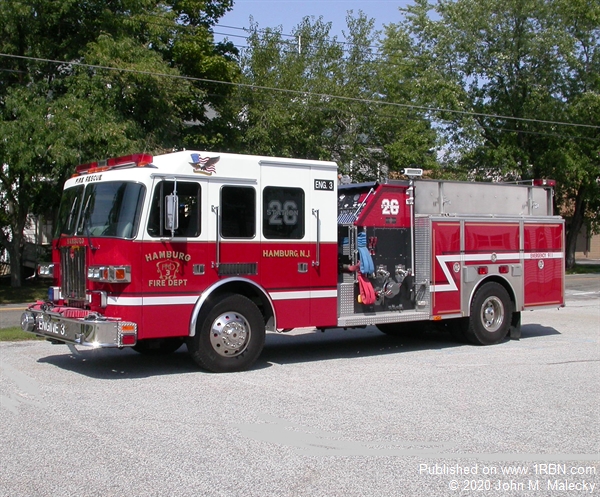 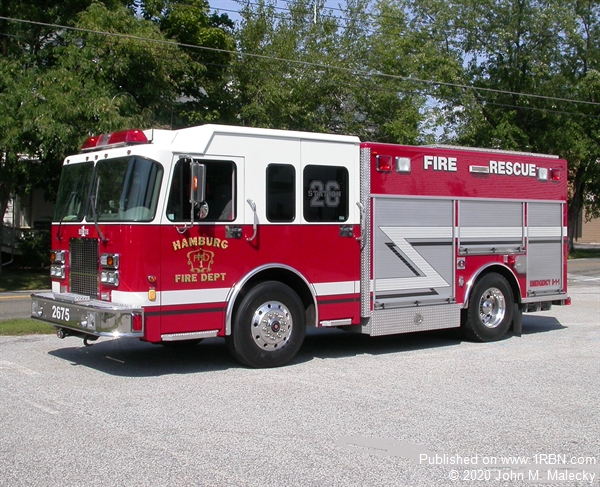 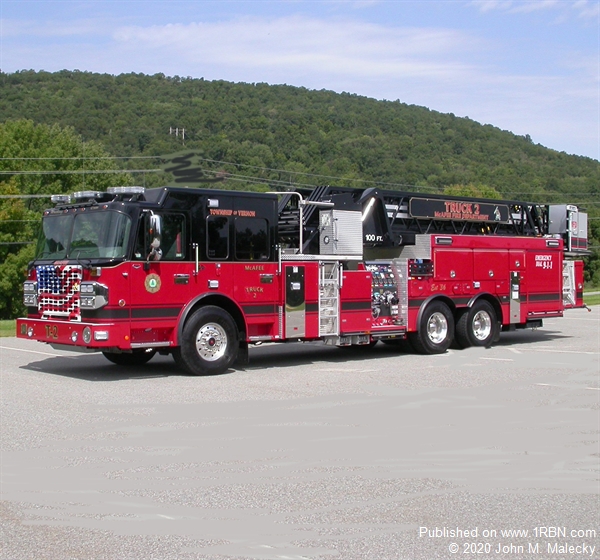 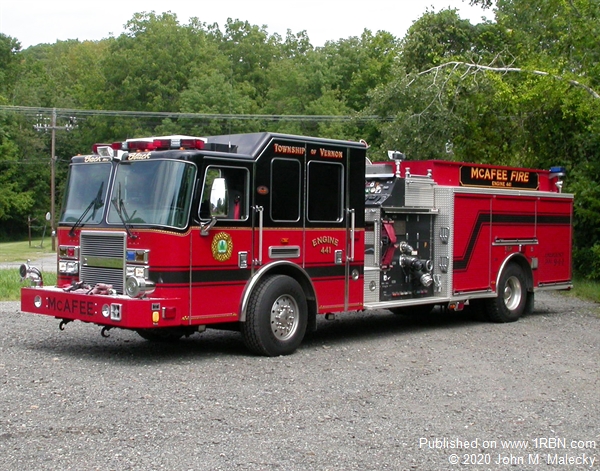 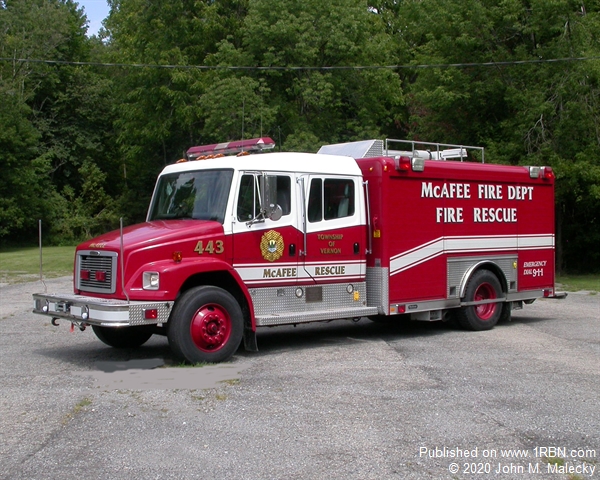 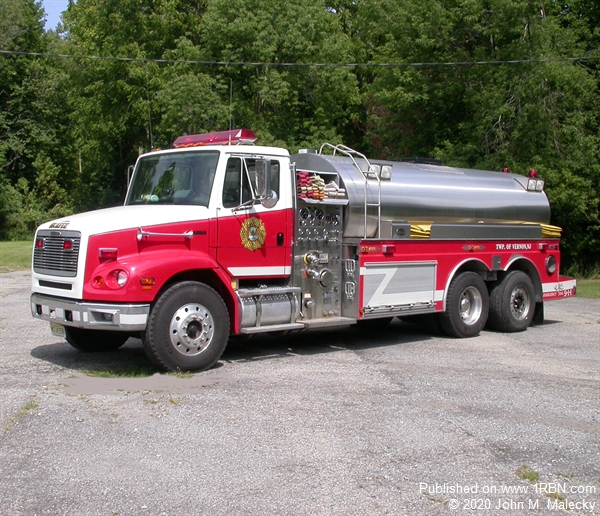 
This month we travel to Sussex County to feature apparatus from the McAfee Fire Company in Vernon Township and the Borough of Hamburg. These two areas are rather close with a section of Hardyston Township passing between them. Hamburg is rather small while Vernon Township is very large with McAfee being one of the four fire companies within it. Hamburg is noted for the Gingerbread Castle, a 90-year-old kid’s attraction and theme park which had been closed for many years but is now in the process of restoration. I remember my parents taking me there once when I was very young. Hamburg is a very small borough in which the borough hall is part of the building which houses the fire station. Up till now the last time I was able to photograph one of their apparatus was when they had an open cab 1965 Seagrave pumper. Back then the term “open cab” meant that there was no roof. Another term is semi cab. Today, since the advent of four door cabs, the term could also mean that it is a two door cab with open rear jump seat section. One may ask why have no roof. My late uncle was a Jersey City firefighter and I asked him why their apparatus had no roofs when I was a teenager. He told me that the chiefs wanted the drivers to be able to see all around themselves. In addition, aerial ladder trucks had no roofs in order to make it easier to spot the turntable for lining up a window. Anyway, Hamburg has three apparatus featured here. The newest is a short wheelbased Sutphen pumper with a right side pump panel behind a roll up door. It has a Command Light and an Akron deck gun. They also have a 1998 Sutphen pumper with top-mount pump panel. This pumper, in spite of its age, looks immaculate. Their other unit is a Spartan/Rescue 1 rescue truck with a 14.5-foot non-walk-in body. It has a large generator and an air cascade unit. As for McAfee, I first visited McAfee in 1977 when I heard about them having a black American LaFrance pumper with a Playboy Bunny logo on the doors. The story was as I heard it, the Playboy Club, which at the time was located at Great Gorge in McAfee, donated this 1948 ALF pumper with the agreement that it would be painted black and have the logo on it. When I finally got to McAfee, the black pumper was there but without the logo on it. The firefighter who was at the station played down the story that the pumper belonged to them but did not expand on the story I had heard. No big deal! However what was also at the station was a new Diamond Reo tilt cab/Thibault pumper with all rear discharges and a 900-gallon water tank. It was yellow. It was a rare find for apparatus photographers. In the station as well was a 500 Series American LaFrance service aerial, another rare find, however the tires were off of the rear axle and the truck therefore could not be photographed outside. Current apparatus featured includes a new Spartan/Smeal 100-foot mid-mount platform. It replaces a 1988 rear-mount aerial quint. Specs include a Gladiator MFD chassis, Cummins ISX 15, 600 hp diesel engine, Waterous CC100PL, 2000-GPM pump, UPF 300-gallon water tank, Harrison 10 kw generator, HiViz lighting, TFT Monsoon RC monitor and two 1 ¾-inch crosslays. Their other apparatus includes a 2009 KME Severe Service pumper, a 2000 Freightliner/Hackney rescue and a 1998 Freightliner/S & S tanker.

New Jersey Emergency Vehicles has made the following P.L. Custom ambulance deliveries: a Classic Type 1 on a Ford F-550 chassis to the Haworth VAC (Bergen County) and two Medallions on Ford F-450 chassis in Monmouth County. One went to the Fairview FAS in Middletown Township and the other to the Township of Millstone Fire District 1.