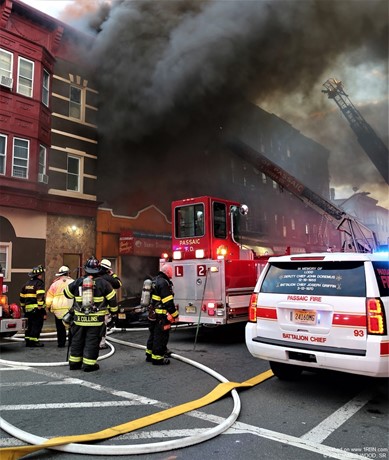 Units arrived to fine heavy smoke coming from the rear of the structure. Firefighters were sent to the rear to do a search when they were told there was a woman inside. They made an aggressive attack two times, but were forced back from heavy fire and heat. At that time Battalion Chief Alberti requested a second-alarm and then a third-alarm to cover firehouses.

Two lines were stretched to the front and to the rear to knock down the stubborn blaze. As the fire continued to rip through the building and out of the roof, the chief ordered crews to go to a defensive operation so the bulk of the fire could be knocked down.

Both aerial ladders from Passaic were set up along with one from Clifton, and multiple hand lines were also put in place.

The fire was placed under control at 5:05 P.M. Wallington, Clifton, Paterson and Hackensack's air unit were sent to the scene, while Garfield, East Rutherford and Rutherford were all sent to cover the Jefferson St. firehouse.

The unaccounted for woman was later found deceased. There were no reports of any other injuries. The Passaic County arson squad and the Prosecutor's office were requested to the scene.