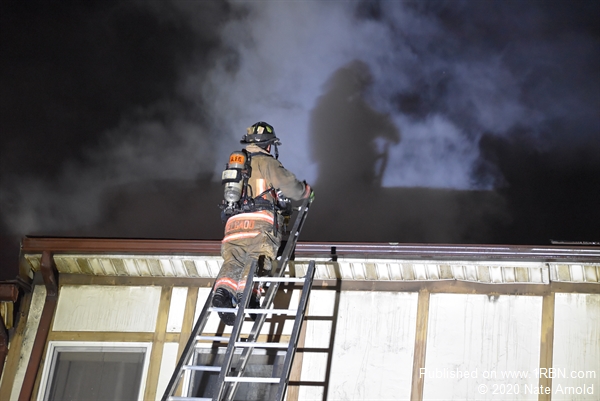 Photo by Nate Arnold Agawam FF Luis Delgado checks on roof conditions from the tip of a ground ladder. 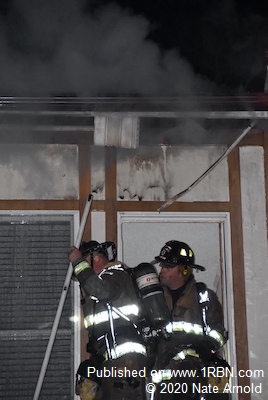 Photo by Nate Arnold WSFD FFs Justin Rainville and Gerry Filip step out on the porch roof while chasing a hot spot in the ceiling.

West Springfield, MA - A fast-moving fire grew to four alarms early in the evening of December 18, 2020 and damaged or destroyed six units of a garden variety apartment complex in the Ashleyville neighborhood of West Springfield.

Calls to 911 started coming into West Springfield Fire Alarm at 7:00 P.M. for reports of a fire at the Brush Hill Avenue condos on Lina Lane, and first due Engine 3 reported that they had fire visible in the sky over half a mile away.

Arriving on scene, Engine 3 found fire taking possession of the wood-framed porches on the back side of the three-story structure and heavy fire venting from the second and third floors on the opposite side. Crews faced an uphill battle from the start of the operation. Literally. The complex is built into the side of Brush Hill Avenue, which has roughly a 30 percent grade, and the air temperature at the time of the fire was well below 32 degrees, so water was freezing on contact which made for horrible working conditions outside the fire building.

Due to the size and construction of the fire building, extra alarms were struck right away to bring in much needed manpower and both mutual aid and West Springfield fire companies performed yeoman's work to bring the fire under control within an hour of the initial 911 call. Overhaul operations however, extended several hours more, late into the night.

While no civilian injuries were reported, several WSFD members sustained minor, non-life-threatening injuries due to icy conditions on scene, and one member required transport to the hospital for further treatment.

All residents displaced by the fire were assisted by the Red Cross. The fire, while not believed to be suspicious, is under investigation by the WSFD and the State Fire Marshal's Office.