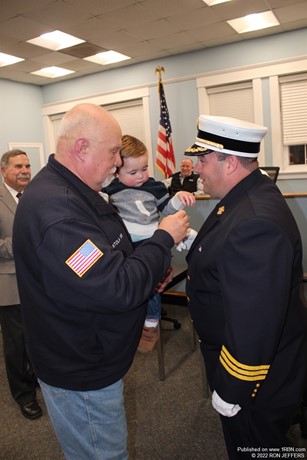 Photo by RON JEFFERSRidgefield Park Ex-Chief John Anytola, Sr., and his grandson Luca, pin the chief's badge on John Antola, Jr., for his 2023 term as Chief of Department, at Village Hall on December 13th.

RIDGEFIELD PARK, NJ - The Fire Department's 2023 officers took the oath of their positions at Village Hall on December 13th. The court chambers was filled with fellow volunteer firefighters, village officials, families and friends.

Fire Chief John Antola, Jr., who was sworn in for another term as chief, provided the Board of Commissioners with his annual report. At the time of his report the department's six fire companies had a total of 345 runs for 2022, providing citizens with over 8,000-hours of service. Firefighters had completed over 600-hours of training, plus individual courses that members take on their own. This included haz-mat and swift water classes. A replacement program has included new Thermal Imaging Cameras. In addition, he reported that the department received a $46,000 grant that will go towards the purchase of new turnout gear.

Chief Antola also thanked the commissioners, police, EMS, rescue squad and DPW personnel for their assistance over the year. And, of course, a big thank you to their families that put up with the volunteer first responders leaving homes at all hours of the day and night to protect the community.

Mayor John Anlian said a “thank you” was not adequate. As a village commissioner, he learned just how long training is needed to become, and remain, a firefighter.

“Most people have no idea what you do,” the mayor said. “Thank you for joining the Department.” He added, “In your heart you are doing something terrific. Be proud of what you've done.”