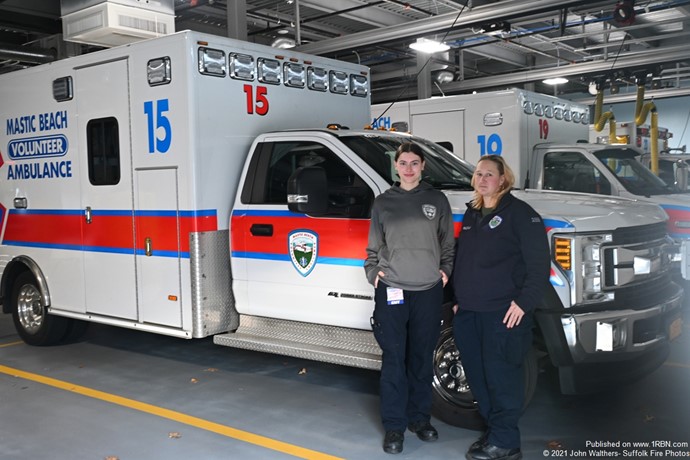 Photo by John Walthers- Suffolk Fire PhotosMastic Beach Ambulance members Alex Schurek & Nicole Young in front of Ambulance 5-39-15 shortly after returning back to HQ after helping rescue a man from a burning car in Riverhead. 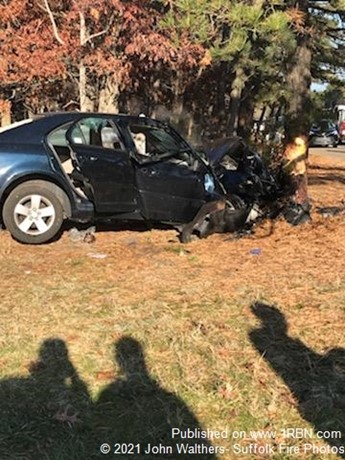 Photo by John Walthers- Suffolk Fire PhotosThe scene of the accident where a car crashed and went up in flames.

RIVERHEAD, NY - On Saturday, December 4, 2021, Mastic Beach Ambulance 5-39-15 was returning from Peconic Bay Medical Center shortly after 1:00 P.M. when the ambulance was flagged down just past the Riverhead Jail to assist at a MVA with a car fire. Without hesitation, Mastic Beach EMTs Alex Schurek and Nicole Young sprang into action to assist the driver that was still trapped in the vehicle. They notified Medcom of the situation and went to work.

Alex was able to grab the fire extinguisher and put the fire out, and then they went to work making entry through the back window since the driver's side door was unable to be opened. Alex was able to get into the vehicle and assess the patient and provide care until local fire and EMS providers from Flanders and Riverhead arrived and took over.

After being extricated by the fire department, the patient was transported by Flanders Ambulance to an awaiting Suffolk Police Medevac which then transported them to Stony Brook University Hospital. The extent of the injuries was not released by officials. The Southampton Town Police was the lead agency on the accident investigation. NYS Troopers were also on scene.