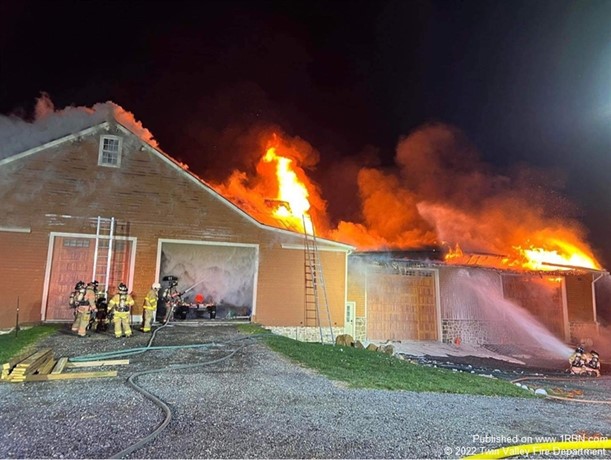 Photo by Twin Valley Fire DepartmentAs fire shot through the roof of the garage and barn, master streams were established to knock the fire down. 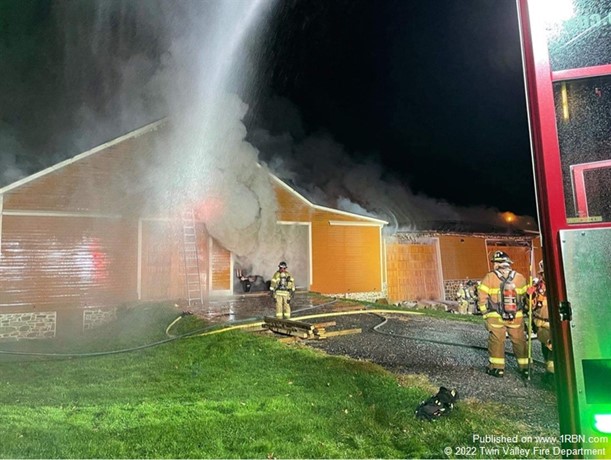 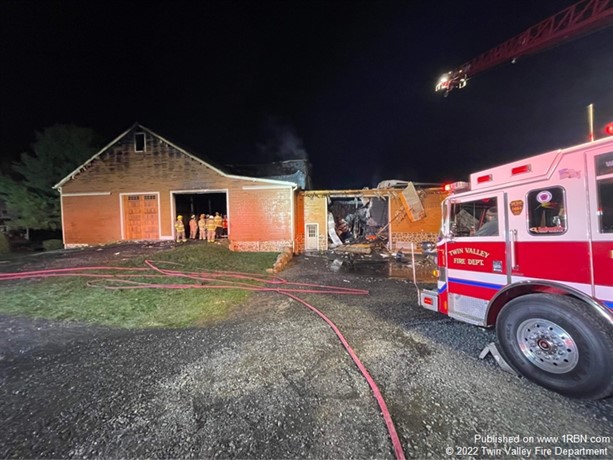 WARWICK TWP., PA - At 9:33 P.M. on November 17th, Twin Valley FD was dispatched along with mutual aid companies to a dwelling fire at 2550 Ridge Rd. in Warwick Township. A passerby reported fire from the roof of a residence.

TVFD Engine 69-1 and Engine 69-5 were on the road with full crews in under two minutes. Engine 69-1 and Chief 69 arrived to find fire showing from a large barn. Chief 69 assumed command and requested the working fire dispatched, as well as a tanker task force.

Crews found heavy fire from the rear of a large garage that was connected to a barn. Several one-and-three-quarter inch hand lines were stretched simultaneously to both the exterior and the front main door of the barn. Engine 69-5 began a split lay in the driveway to the barn, and Ridge Fire Co. Engine 62-5 finished the split lay to Ridge Rd. where a porta-tank was set up for tanker operations. Glen Moore Fire Co. Engine 48-1 was sent to establish a fill site at Saint Peter’s Village.

Additional tankers were requested to the scene, bringing companies from as far as East Whiteland and New Holland. Ludwig’s Corner Fire Co. Engine 73-1 was sent to establish a second fill site on Brick Lane in Elverson. With the amount of manpower on scene or en route of the extensive operations, Montgomery County Canteen 41 was requested to the scene.

After the aerial was placed in service crews discovered that solar panels were on the roof that collapsed. All water operations were shut down until it was determined that the solar panels were disconnected. Once that was confirmed operations resumed. Several master streams were in service, including the aerial, a deck gun and ground monitors to contain the fire, along with multiple hand lines.

An excavator was called to the scene to assist with demolition of the compromised garage. The fire was placed under control just over five hours into the incident. Crews continued to work to extinguish hot spots as the Chester County Fire Marshal’s Office began thier investigation. Once determined that all hot spots were extinguished, crews began breaking down. The final units cleared the scene just before 5:00 A.M.