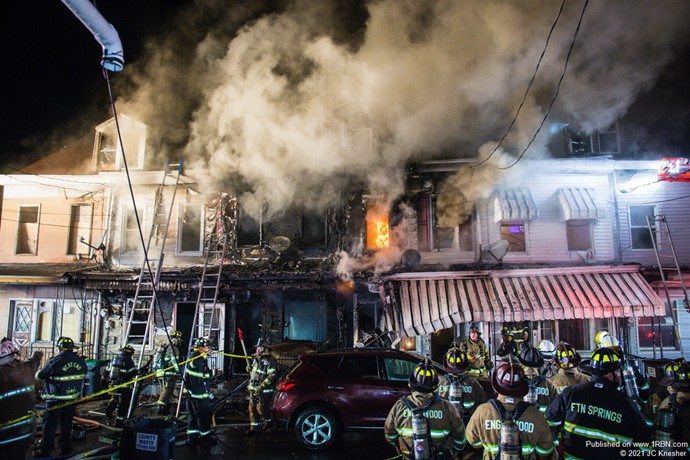 Photo by JC KriesherA row of homes were damaged in the 1000 block of East Pine Street in Mahanoy City. A resident of 1017 East Pine was charged with lighting the fire. 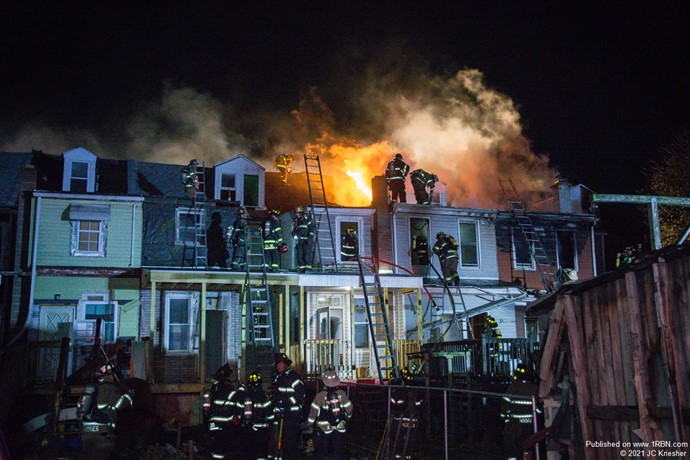 Photo by JC KriesherFlames shoot from vent holes in the roof 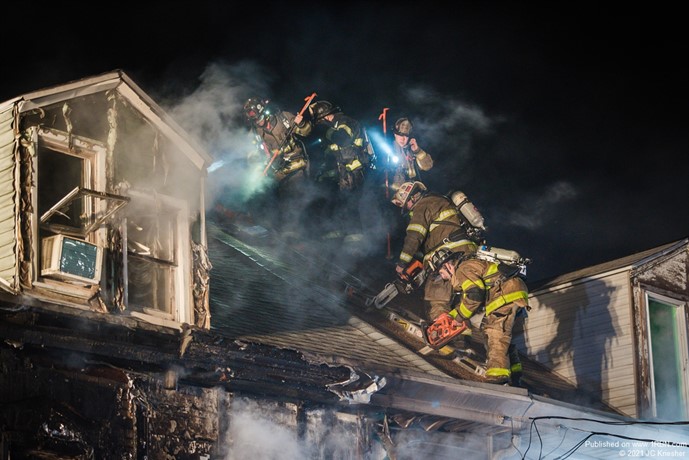 Photo by JC KriesherTruck crews work to trench the roof on the east side of the fire.

Units arrived on scene quickly to find heavy fire showing from the middle of a row with an altercation in the street. Lieutenant 48-2 took command and requested a second-alarm to the scene.

Engine 48-15 arrived and stopped short of the address and stretched lines to the front of the building. Ladder 48-25 positioned on the east side of the fire and set up the aerial to the roof. Engine 48-12 came in behind the ladder while Engine 48-10 went to the rear on Market Street. Ladder 43-20 was directed behind 48-15.

Chief 48 arrived on scene and assumed command of the incident.

Firefighters stretched multiple lines into multiple addresses as the fire was spreading in both directions. Shenandoah Engine 64-10 and Tiller 64-25 were sent to the rear with 48-10 and assisted with operations. These units assisted with stretching lines in the rear and laddering the building. Once laddered, crews ascended to the roof for ventilation.

While in the middle of the fire fight, command was advised that there had been a water main break just outside Mahanoy City. With that information, a Tanker Task Force was requested in case additional water was needed. Crews were able to trench the roof on both side and stop the spread of fire to more areas while interior firefighters darkened down the fire inside.

Additional apparatus was requested to move up to Mahanoy City to cover, but then brought into the scene to assist with manpower. Those units included Ringtown Engine 30-15 and Minersville Tower 52-22. An additional RIT was brought to the scene from Schuylkill Haven. Sheppton-Oneida Engine 9-10 and Nesquehoning Ladder 1321 were moved to the West End Fire Station to provide standby coverage.

Neighbors told Fire & Film that Hasara was carrying-on on the front porch about the borough condemning his property and moments later went in and set the house ablaze.