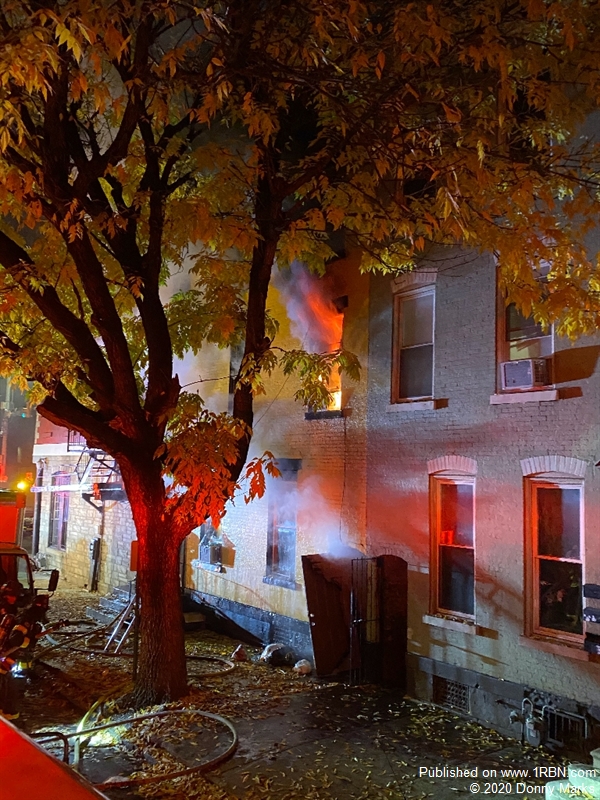 Photo by Donny MarksReading Firefighters arrived at this 3-story rooming house with fire rapidly extending from the first to the second floor via void spaces. The fire required additional manpower and took an hour to control.

Deputy Chief Glore (Car 9) arrived with fire showing from the first floor and baker's alley of a three-story boarding house. People gathered outside the building advised Glore that there were still people asleep inside. Firefighters stretched a hose line into the first floor of the building to protect the stairs as crews ascended to begin a search.

A second hose line was placed in service to stop the fire from spreading through the alley. With the fire now showing on the second floor, Chief Glore requested a second alarm. With all hands working, an occupant appeared on the roof after escaping his apartment. Crews removed the man after raising a portable ladder.

Several areas of the building needed to be opened up to stop the progress of the fire. The remainder of the building was clear of other occupants. The fire was eventually placed under control an hour later.

Two firefighters sustained minor injuries but did not require transport. No other injuries were reported, and the Fire Marshal's Office is investigating. Units from Spring Township, Mount Penn, Lower Alsace, and Exeter assisted.