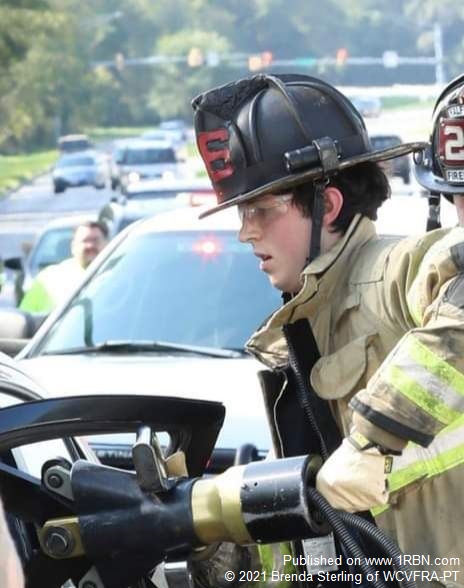 Photo by Brenda Sterling of WCVFRA-PTHalfway Firefighter Neal conducting a Door-Pop on an MVC near Valley Mall. 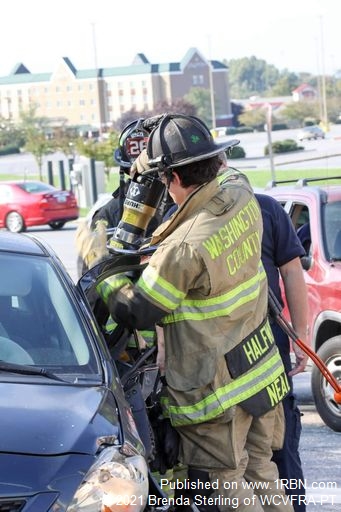 On the morning of October 15th, Halfway alerted for the Engine and Medic Unit for a personal injury accident in front of the Dollar Tree at 11305 Massey Blvd. Washington County ECC had reports of a minor two vehicle collision. Halfway units arrived to find a two-vehicle accident with one patient confined to the vehicle. A second Medic unit was requested as firefighters set up for extrication.

Engine 26-1 established Massey Blvd Command and advised the ECC they had one patient confined as EMS was evaluating two other patients. Rescue Engine 2 out of Williamsport was started to assist as Engine 261 began extrication while Medic 269 began to evaluate the other patients on the scene. Firefighters Neal and Black began extrication of the patient using the Hurst Spreaders and was able to conduct a quick door-pop making access to the patient. Command reported Extrication complete and placed Rescue Engine 2 back in service.

All victims were evaluated by EMS personnel on Medics 26-9 and 26-7. Three patients total were transported to Meritus Medical Center with non-life-threatening injuries from the scene by Halfway. Engine 26-1 checked the scene for additional hazards and mitigated a fluid spill consisting of oil and antifreeze. Once all hazards were mitigated, Command was terminated. Engine 26-1 remained on the scene with Washington County Sheriff’s Office and Fire Police until both vehicles were removed by the towing agencies.