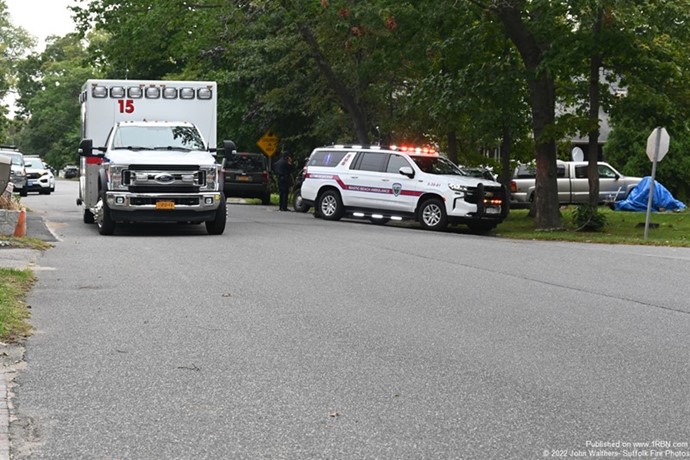 Photo by John Walthers- Suffolk Fire PhotosMastic Beach Ambulance on scene of a call for a car on top of a person.

MASTIC BEACH, NY - On October 2nd at about 3:05 P.M., the Mastic Beach Ambulance Company was activated for a report of a person pinned under a car. The Mastic FD, who were covering the Mastic Beach Fire Department's coverage area, was also activated to respond to the scene. It was reported by dispatch that the car fell on top of an adult male.

Mastic Beach Ambulance Responder 5-39-81 and Ambulance 5-39-15 quickly responded to the scene along with Mastic FD's 1st lieutenant. Engine 5-12-2 was also dispatched in. On arrival, responders from the agencies along with officers from Suffolk Police 7th Precinct were able to remove the male from under the vehicle without need for ESU or a heavy rescue truck.

EMS went to work evaluating the patient, who was not breathing at the time of removal. Despite the efforts of the responders, the patient was pronounced dead at the scene. The scene was turned over to Suffolk County Police to investigate, however it did appear that at the time of the incident the gentleman was working on the car before it fell on him. No further details have been released by officials.