Is There Justice for Victims of Climate Change? 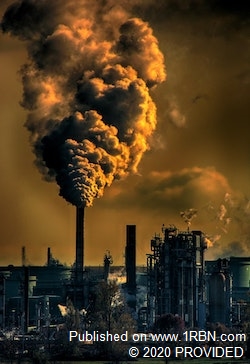 Photo by PROVIDEDInvestigations show that fossil fuel companies knew and hid the effects of climate change for decades. 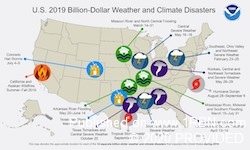 Photo by PROVIDEDFourteen weather disasters hit America in 2019, each topping $1 billion in damages.

Climate Change Could Cost Trillions, While Injuring and Displacing Millions

Americans are witnessing an unprecedented number of weather and climate disasters this year up close and personal. Wildfires continue to incinerate millions of acres of land and thousands of homes in the West. Droughts, floods and even a derecho decimated farmland in the Midwest. Hurricanes and rising sea levels are flooding out thousands of residents along southern and eastern coastal areas.

And it will get worse … a lot worse, according to scientists who pin the blame squarely on man-made climate change. In a staggering report by The New York Times on how climate migration will reshape America, experts predict that these swelling disasters will negatively affect 162 million Americans in the coming years and force millions of people from their homes.

Seeing this devastation with their “own two eyes,” a rapidly growing majority of Americans have become convinced that man-made climate change is real. As the bills come due for trillions in economic losses and human suffering, many people are also asking who’s to blame for putting all of us at risk in the first place. While personal responsibility is an important part of this discussion, the Carbon Majors Report shows that 71 percent of all global emissions are produced by just 100 companies. At the bullseye is the fossil fuel industry, which – according to internal company documents – knew about the risks of climate change decades ago but covered it up with slick PR campaigns and fat contributions to members of Congress.

As the federal government has backed away from addressing this mushrooming crisis, several states, counties, cities and even a group of American children have turned to the courts to hold fossil fuel companies accountable. These groups allege that the fossil fuel giants intentionally misled the public and refused to support measures to address the issue of climate change by filing dozens of public nuisance lawsuits. Some of this litigation has already been struck down by the courts, but many more actions have been filed, some destined for review by the U.S. Supreme Court.

Is There Anything You Can Do?

We know the news about climate change can seem overwhelming and depressing, but there are actions all of us can take to help in this fight for our planet and the future of our children. Here is an article from The Washington Post that features 11 ways you can support measures to stop climate change, including:

Acting sooner than later is critical in holding off the worst consequences of climate change. And once again, it may require the threat of a day in court to force those with vested financial interests to do what is right for the sake of all Americans.