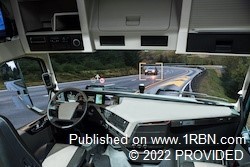 Photo by PROVIDEDFully-autonomous trucks are racking up hundreds of miles on U.S. highways.

“This technology isn’t a question of if but when.”

Pilot programs for fully-autonomous trucks are racking up hundreds of miles on public highways in several states, primarily throughout the sunbelt, where favorable weather conditions and friendly regulations encourage testing.

Examples: TuSimple, the first automated trucking company to go public, hauls “freight from Phoenix to Tucson every day in autonomy,” Jim Mullen, chief administrative and legal officer, told Fortune magazine. Waymo, initially the technology brain behind Google’s automated vehicle program, recently announced that it would test Freightliner semis on public freeways across Dallas and Phoenix. And Plus, another provider of self-driving truck systems claims it has tested its autonomous trucks in 17 states.

No need to panic quite yet, however. Nearly all road tests of fully-automated semis today include a human safety driver in the cab, ready to take the controls if something goes wrong. But the ultimate goal remains: Driverless robot trucks on U.S. roads within the next decade or sooner. “From our view — and what seems to be the broader industry — this technology isn’t a question of if but when,” Andrew Culhane, chief strategic officer for Torc Robotics, told the trade publication FleetOwner.

Weighing the Pluses and Minuses

Supporters of turning over the wheel of a semi to a computer say this will make our roads safer. They point out that human error causes most highway crashes, including an average of 4,000 people killed each year in truck accidents since 2016. Business interests see driverless freight hauling as key to addressing supply chain issues and a national shortage of truck drivers. Trucking companies see big profit in replacing drivers with computers that can run a truck for 17 hours straight without a break.

But many safety experts say NOT SO FAST, questioning whether we should test 80,000-pound trucks alongside the driving public. Case in point: The Federal Motor Carrier Safety Administration is now looking into TuSimple after a tractor-trailer using the company’s driverless technology suddenly veered off an Arizona highway and slammed into a cement barricade. A video of the crash was shared on YouTube by a company whistleblower.

And what about the drivers that will be displaced by driverless trucks? Industry proponents say drivers will still be needed for “final mile” routes where the use of automated trucks is more challenging. They add that working closer to home will significantly improve the grind of long-haul trucking. Unions are not buying these rosy predictions, citing studies showing driverless technology killing up to 500,000 jobs. And trucking companies already have a reputation for pushing their drivers to the physical, emotional, and financial brink.

What Happens If There’s a Crash?

These are pivotal questions as the legal action required to bring a claim against a truck manufacturer, or a software company is much more complex than pursuing the trucking company.

We Want to Know What YOU Think?

So, where are you on sharing the road with driverless semi-trucks?

1. Do you trust the technology enough to support testing driverless trucks on public roads?

2. Would you personally be more comfortable knowing you are driving next to a driverless truck?

3. Who should be held responsible for a crash involving a fully-autonomous truck? The trucking company? The truck manufacturer? The technology company?

4. Should we trust trucking companies to responsibly implement driverless technologies, knowing that every year the trucking lobby fights state and federal legislation that would make them more accountable for deadly trucking accidents?