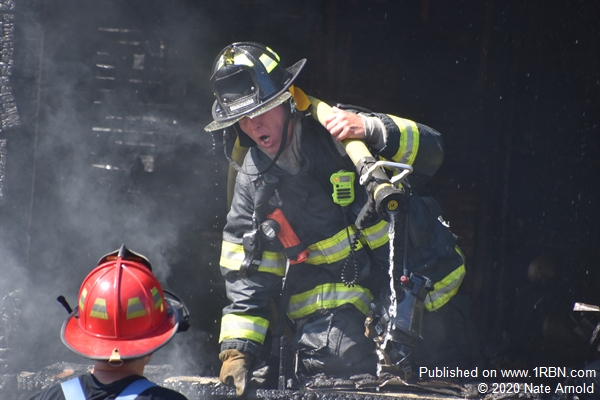 Photo by Nate Arnold A member confers with his officer on the 'A' side of Mansfield St.

Springfield, MA - A wind-swept fire rose to three alarms before being brought under control in the Forest Park neighborhood of Springfield on Saturday, September 19th.

The first 911 call came into Fire Alarm around 12:30 P.M. and first due Engine, Truck and Tactical Unit 3, whose firehouse was a block-and-a-half away, arrived to find the 'Alpha' side of the two-and-a-half story home at 20-24 Mansfield Street fully involved in fire and radiant heat starting to ignite the 'Bravo' and 'Delta' side exposures.

A second-alarm was sounded as Firehouse 3's crews used large caliber lines to try and knock down the heavy fire from the street as the balance of the second-alarm companies were arriving. The fire took possession of the attic of the 'Delta' side exposure building thanks to strong winds blowing through the scene. Mansfield St. command struck a third-alarm as a precaution, bringing the last remaining Springfield crews to the scene along with an engine from neighboring East Longmeadow.

Crews worked hard and managed to contain the fire in the exposure buildings, but the original building at 20-24 was a total loss. Nearly a dozen residents were displaced by the fire and four were transported for evaluation of smoke inhalation. The cause of the fire remains under investigation by the SFD, but is not considered suspicious.