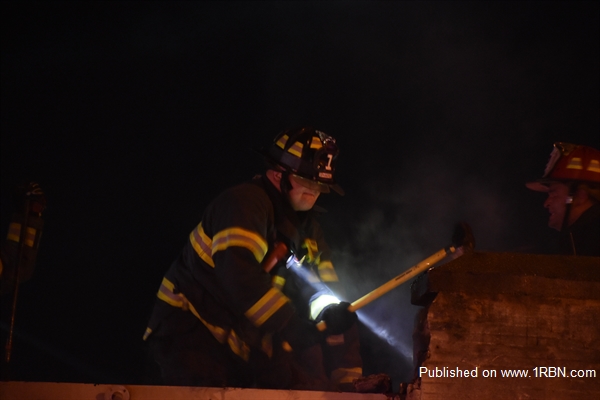 Photo by NATE ARNOLDFirefighter Patrick Drummond uses brute force (and a sledgehammer) to open the parapet wall on Locust St.

An early morning arson fire damaged a long vacant former night club in the Forest Park section of the city and Arson Squad investigators continue to search for the individual(s) responsible for starting the fire.
Shortly before 2:30 a.m. on Sunday August 23, 2020, Springfield fire fighters were dispatched to the intersection of Locust St. and Dickinson St. via multiple 911 calls for a report of a fire in that general vicinity. Crews arrived find smoke and fire venting from the Alpha/Delta corner of a commercial structure. Crews began forcing entry to each unit in the taxpayer as moderate smoke initially indicated the fire may be traveling in the cock loft. 20 minutes into the operation however, it was determined the fire was confined to the original end unit but had worked its way up into the Alpha side parapet wall. This complicated matters as the parapet wall was made of wood framing encased in brick, mortar and a stucco finish. First alarm assignment companies began the back breaking work of tearing apart the parapet wall but were, mercifully, relived by second alarm companies before anyone literally broke his back. During the ensuing fire investigation, SFD Arson Squad members determined the fire was deliberately set and are asking for the public's help in tracking down the party or parties responsible for starting the fire.