Two Motor Vehicle Collisions Shuts Down I-70 at the 29mm 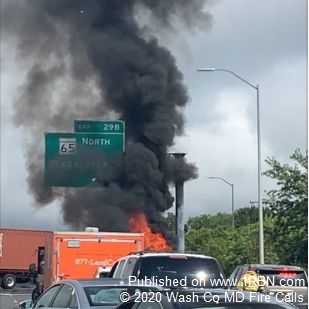 Photo by Wash Co MD Fire CallsCrews switch gears after a 2nd Accident with fire happens on I-70 EB while units are in the process of working a muli-vehicle accident in the WB Lane. 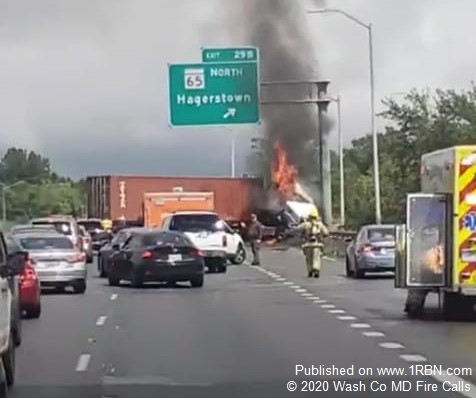 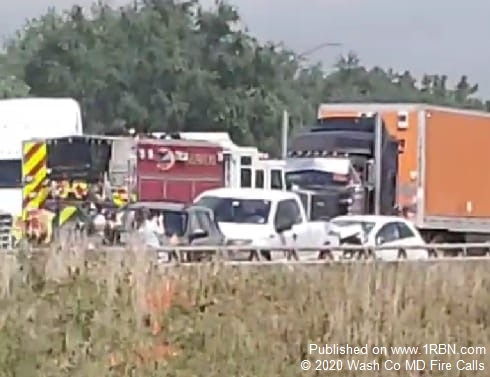 On the afternoon of August 7th, the Washington County Emergency Communications Center (ECC) received reports of a multi-vehicle accident on Interstate 70 in the area of the 29-mile marker. Emergency crews from Funkstown Volunteer Fire Company and the Volunteer Fire Company of Halfway were alerted for the call at 14:47 hours. Units responding were advised that they had up to 7-9 vehicles involved with unconfirmed injuries. With multiple vehicles involved, additional Medic Units from Community Rescue Service and Williamsport Fire and EMS were started to assist. Lieutenant Willie Vazquez from Halfway arrived first to confirm he had multiple vehicles involved and established I-70 Command.

Emergency crews were able to quickly evaluate the scene finding that they had no serious injuries. Command reported he had no entrapments and was holding the incident to two Medic Units only and was releasing the rest. With in seconds of the report to the ECC, units working the scene witnessed a second accident in the opposite lane of Interstate 70. Personnel were jolted by the sound of the skidding rubber as they looked up to watch a tractor trailer on the east bound side of the interstate strike the guardrail and erupt into flames. Firefighters quickly sprang into action rushing to the aid of the tractor trailer driver who was already self-extricating himself as Command reported to the ECC that they needed a second assignment started for a second vehicle accident on the East Bound side with fire. The fire appeared to be rapidly growing so Command requested a Tanker Task Force started on the assignment.

Interstate 70 was brought to a complete standstill in both directions for several hours as emergency crews worked both incidents. No serious injuries were reported with either accident that afternoon. One motorist involved with the West Bound accident was transported to Meritus Medical Center with non-life-threatening injuries. No other motorists involved required transport to the hospital, but one firefighter was transported to Meritus Medical Center for evaluation after suffering a heat related emergency.

The interstate was shut down for several hours causing severe traffic delays throughout the area. Washington County Fire Police and Hagerstown City Auxiliary worked together to shut down multiple ramps for I-70 and handled traffic control in the Funkstown area while crews were operating on I-70. West Bound I-70 was able to be re-opened around 17:00 hours, while East Bound remained closed until all hazards were able to be removed around 19:00 hours that evening. Both accidents are currently being investigated by the Maryland State Police.