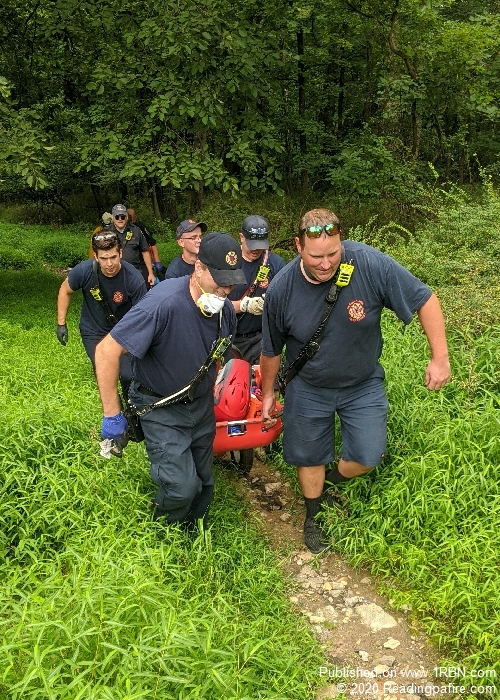 Photo by Readingpafire.comReading Firefighters work to extricate an injured mountain biker from Mount Penn Mountain. Crews utilized the "TURK" extrication device to transport the patient up some bike trails to reach the ambulance.

Reading, PA - On Saturday, August 15th dispatchers with the Berks County Department of Emergency Services received a cell phone call from a person reporting a mountain bike incident on Mount Penn Mountain. The caller reported a man had sustained a severe leg injury on the trail below Skyline Drive. While a rescue assignment was being sent the caller was advised to wait near the road to direct crews to the biker. Rescue 1 arrived and was met by the victim's fellow bikers who directed crews to a location on the bike trails below Drenkel Field on Skyline Drive. Based on the patient information provided and the distance/terrain involved, Brush 1 was added to the assignment. Crews encountered a patient with a severe orthopedic injury to his leg. ALS was initiated and the patient immobilized for transport. Patient was extricated utilizing a stokes basket and the TURK extrication device. After 30 minutes the extrication was complete and the patient was transported to Tower Health Trauma Center. Chief Kemery (Car 3).