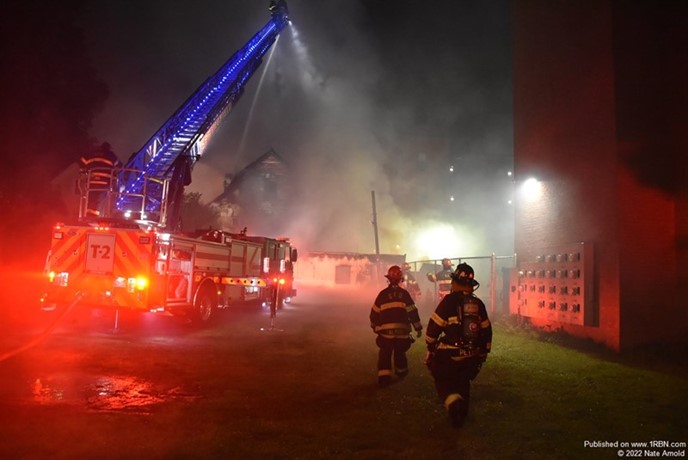 Photo by Nate Arnold Truck 2 plays their master stream into the duplex as smoke continues to rise from the garage.

SPRINGFIELD, MA - An early morning fire in the north end of the City of Springfield destroyed a vacant duplex and garage on Monday, August 1st at 4:00 A.M., and sent residents of a neighboring apartment building into the street as SFD jakes worked to contain the fire.

The tones sounded, rousing the overnight tour firefighters from their bunks for a reported structure fire on Main St. The initial dispatch sent companies to 2800 Main St., but as the members of Engine 7 were donning their gear, a frightened neighborhood resident came to the fire station to report that there was a fire on Huntington St., one block south of the dispatched address.

As Engine 7 rolled into the block on Huntington, they found a well involved garage that was actually behind a two-and-a-half story wood-frame duplex on Greenwich St. By the time Engine 7 began combating the fire, it had already extended to the duplex and was taking possession of the second floor and attic as the balance of the first-alarm assignment arrived.

With heavy fire now burning on the upper floors of the building and occupied exposure buildings on both the 'Bravo' and 'Delta' sides, Fire Commissioner BJ Calvi ordered the second-alarm to be struck within minutes of his arrival.

Crews stretched lines to the 'Alpha', 'Bravo' and 'Charlie' sides of the dwelling and put ladder pipes into operation on the 'Alpha' and 'Charlie' sides in an effort to contain the fire to the garage and duplex at 15-17 Greenwich. With manpower on scene and good line placement, the main body of fire was knocked down within 30 minutes and crews worked until dawn overhauling the remains of the buildings

The cause of the fire remains under investigation, and no injuries to responding firefighters were reported.