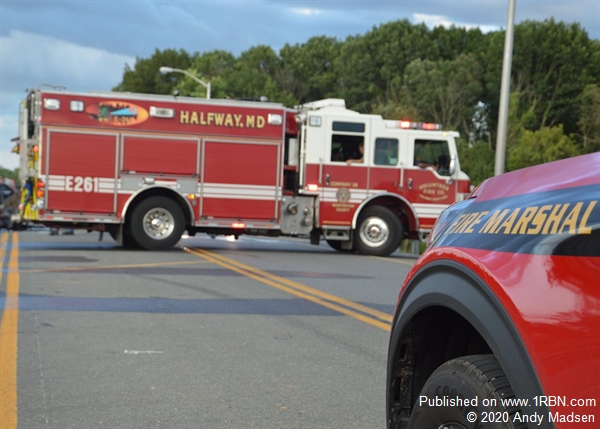 Photo by Andy MadsenCrews from VFC of Halfway assist on serious accident on Wesel Boulevard. 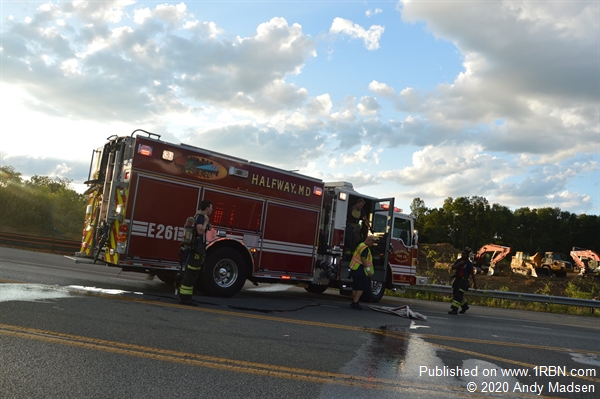 On the evening of August 2nd, emergency crews from the Hagerstown Fire Department and the Volunteer Fire Company of Halfway were alerted for a personal injury collision on Wesel Boulevard around 1912 hours. Washington County Emergency Communications received multiple reports of a two-vehicle accident with one on fire. Officers from Hagerstown City Police arrived to find one vehicle engulfed in flames with one occupant still in the vehicle on fire. Battalion Chief 3 was advised of Hagerstown Police Departments findings and a second Medic Unit was started and operations was switched to Tac 1 Ops.

Battalion Chief 3 arrived confirming he had a two-vehicle accident with one vehicle still occupied and on fire. Firefighters quickly pulled an attack line and began their fire attack to make access to the patient. Firefighters were able to get a quick knock down on the flames, but the patient was already deceased. In the meantime, the crew off Medic 269 was tending to the driver of the second vehicle involved. Command advised Emergency Communications that they had one Priority 4 patient and requested them to notify Meritus Medical Center that Medic 269 would be transporting one Priority 2 Category C trauma to their facility. The second medic unit out of Community Rescue that was responding was canceled at that point with confirmation they only had one patient for transport. Medic 269 quickly packaged their patient and transported to Meritus Medical Center as Fire crews began wrapping up their operations.

Fire crews were committed on the scene for about 30 minutes while securing any remaining hazards. The scene was turned over to Hagerstown City Police around 1941 hours. The roadway remained closed for a lengthy period due to the nature of the accident and the need for a reconstruction crew to come out to the scene to determine a cause. Hagerstown Fire Department’s Truck 3 responded back out later that evening to assist investigators on the scene as they worked investigation into what caused the fiery crash. The roadway was completely re-opened shortly before Midnight.

The incident remains under investigation by the Hagerstown City Police. They were able to identify a Smithsburg Man who was killed in the accident. They believe the vehicle driven by the Smithsburg man drifted across the center line into the path of the other vehicle striking it head-on. The driver who was transported to Meritus was reported by Hagerstown City Police to have non-life-threatening injuries.