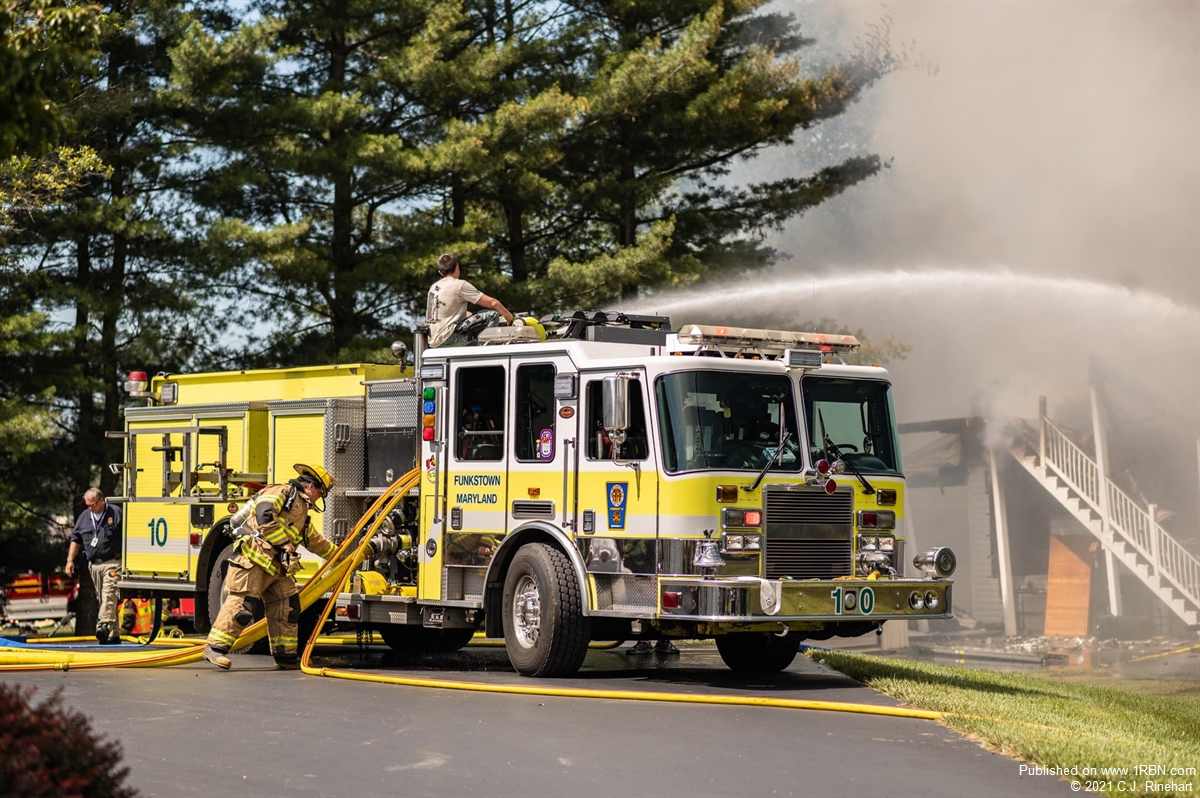 Photo by C.J. RinehartFunkstown Engine 10-1 on the scene on Carter Lane operating the Deck Gun to control the blaze. 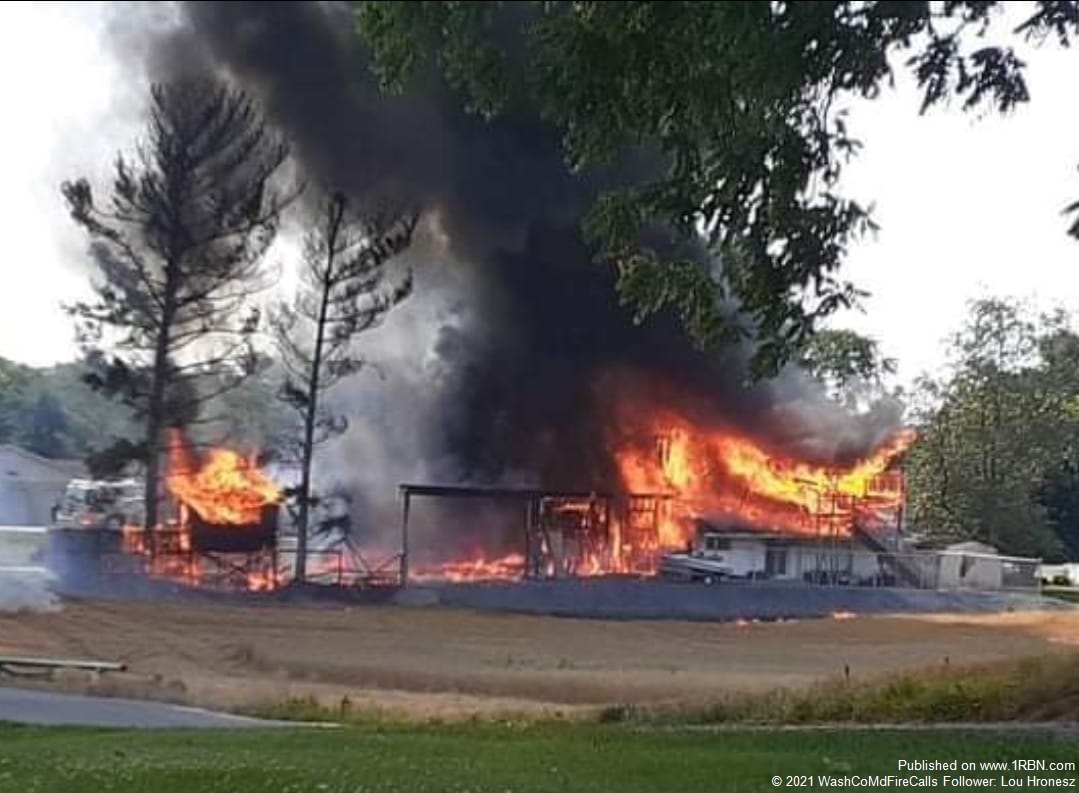 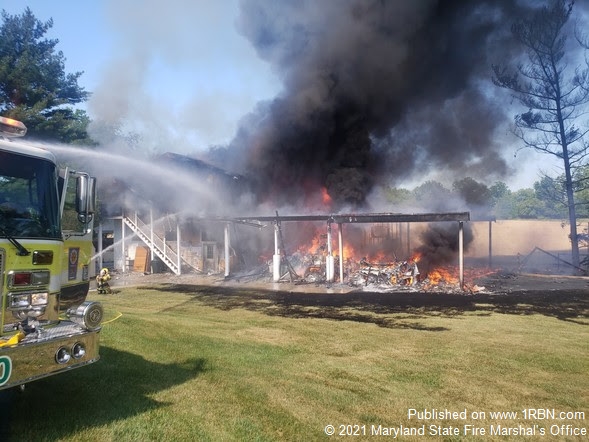 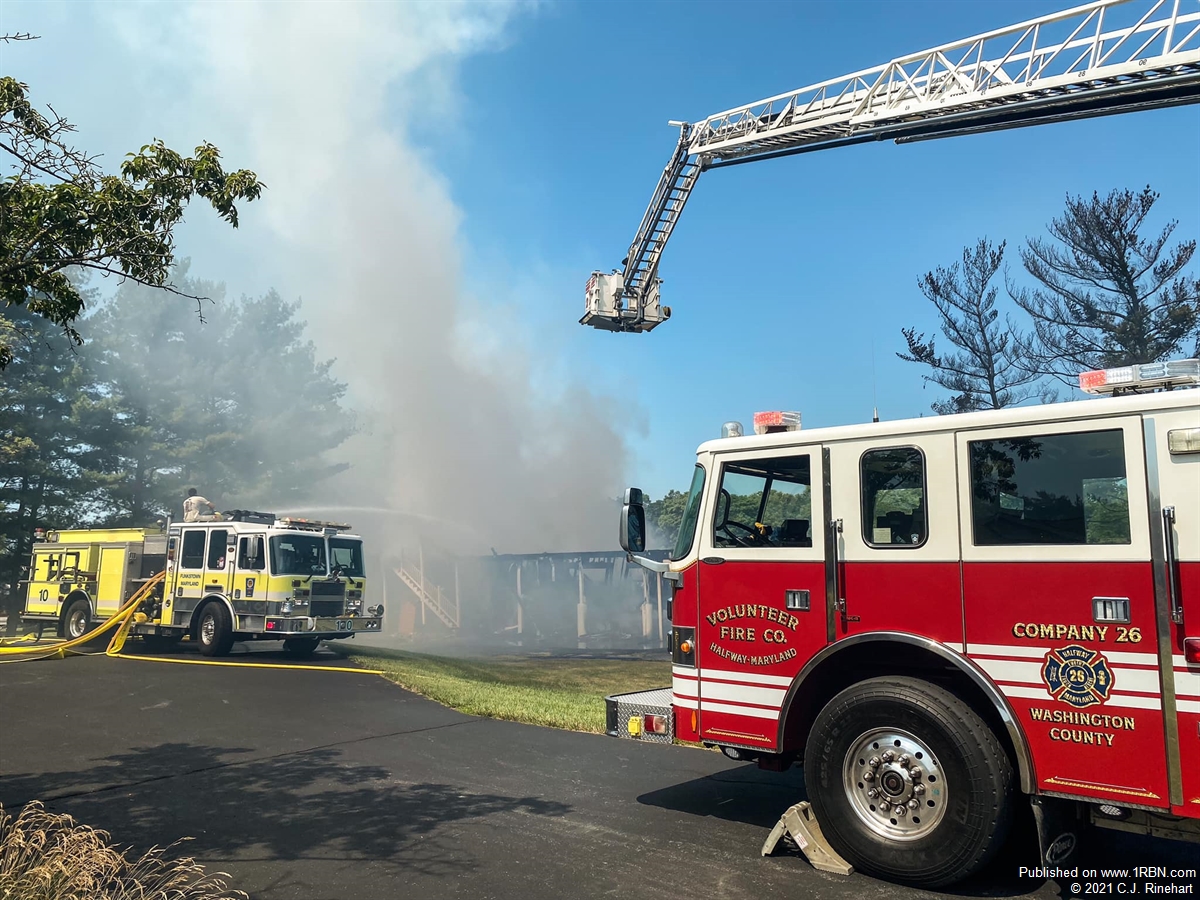 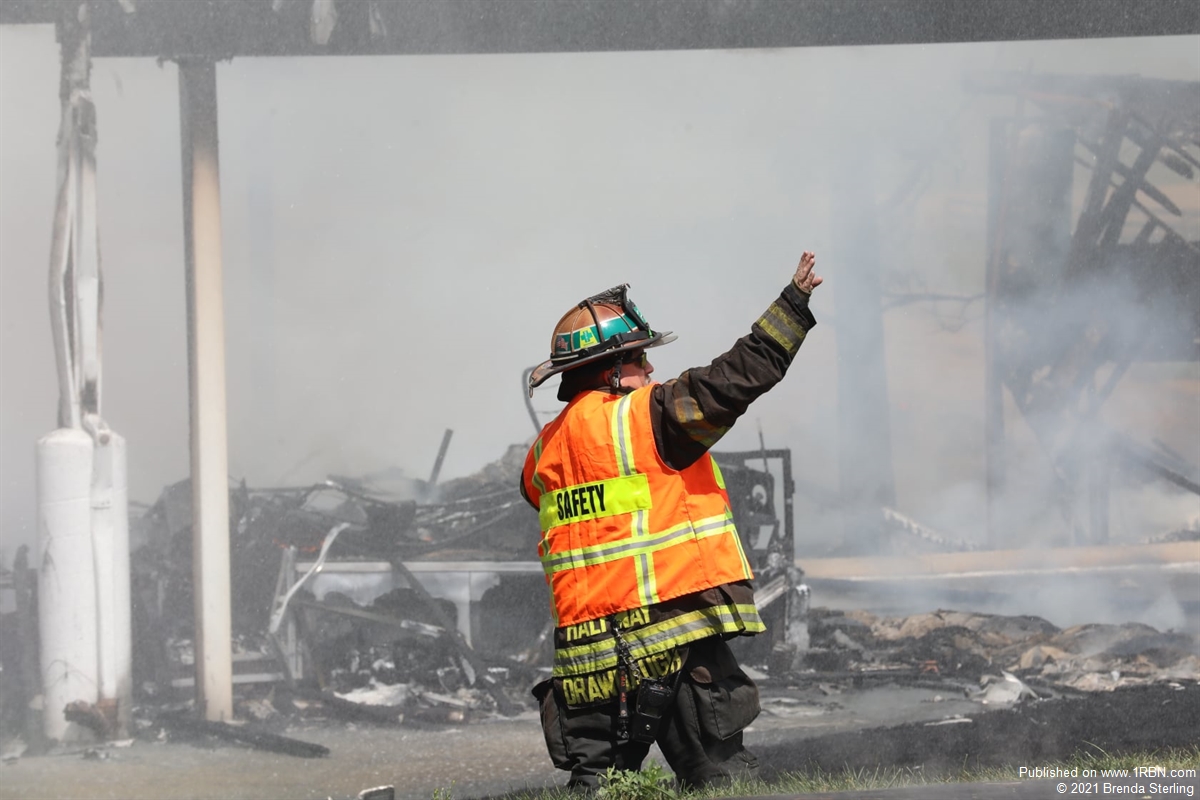 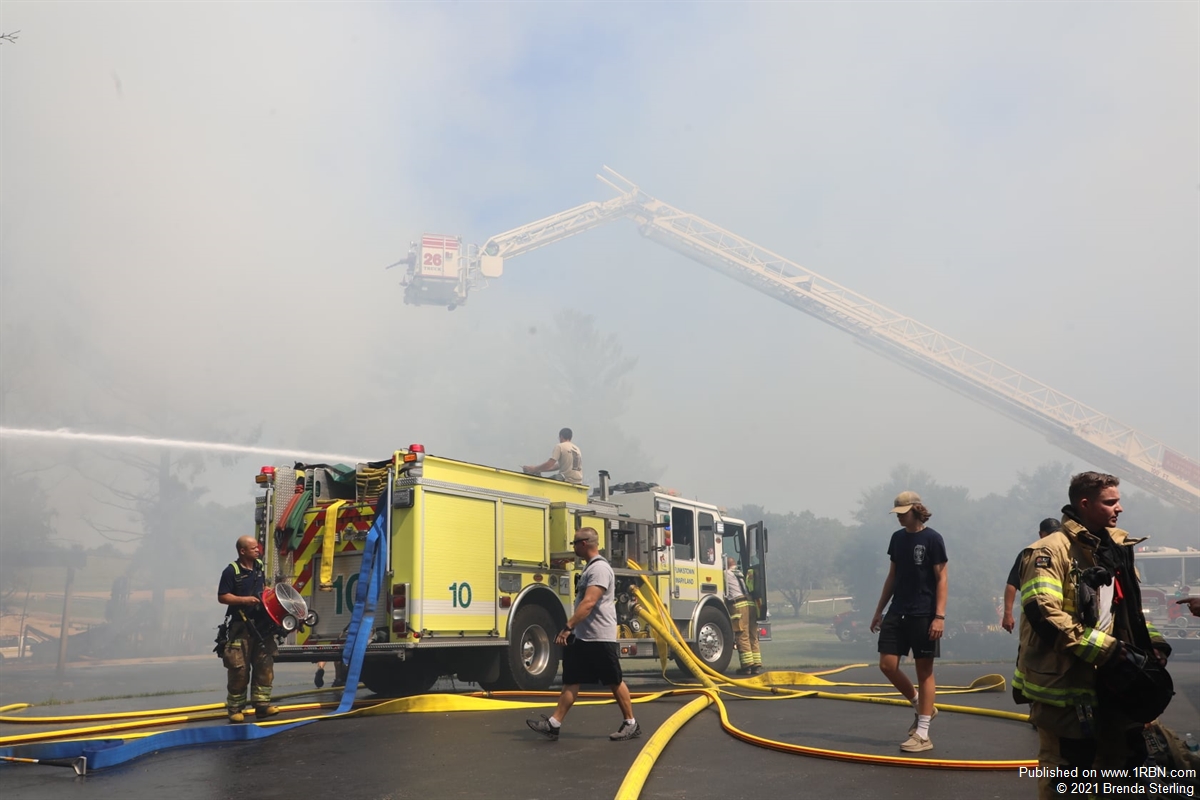 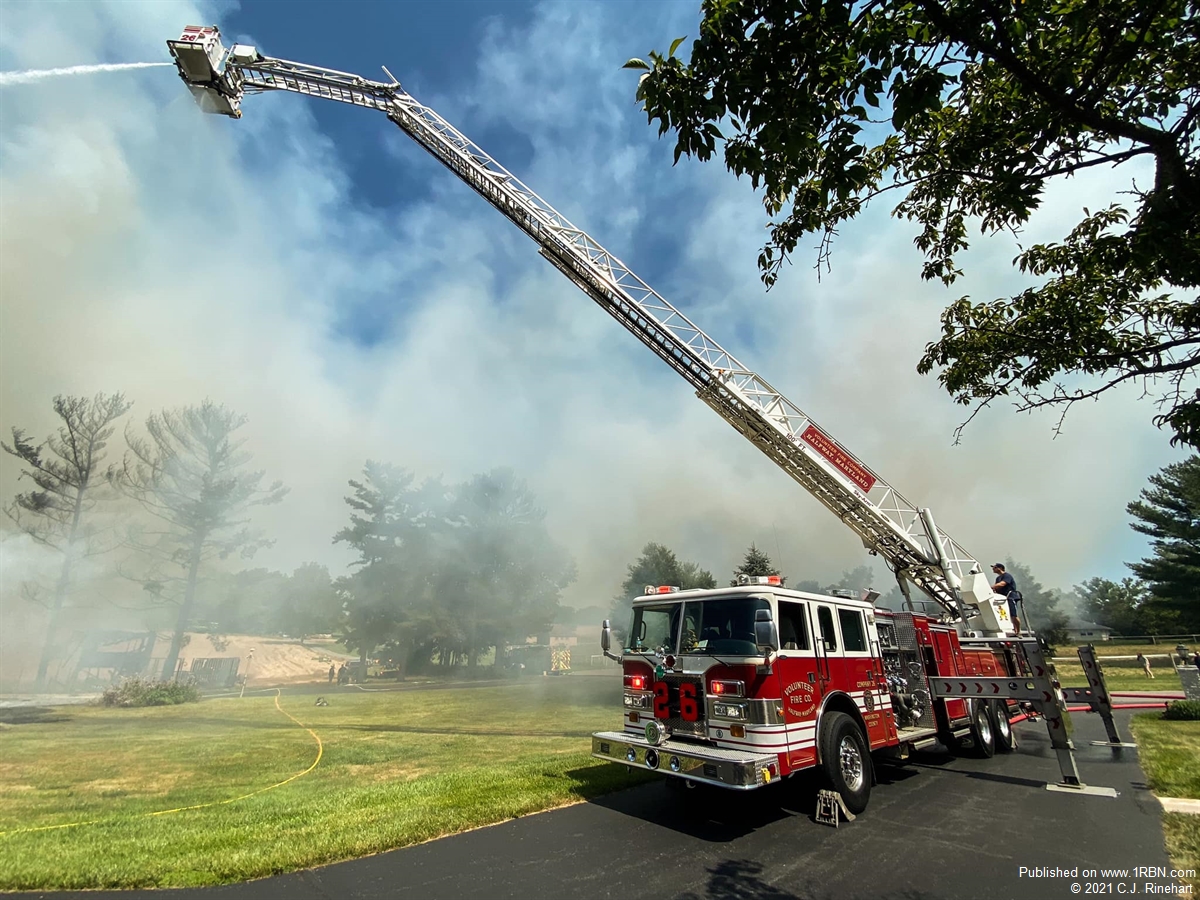 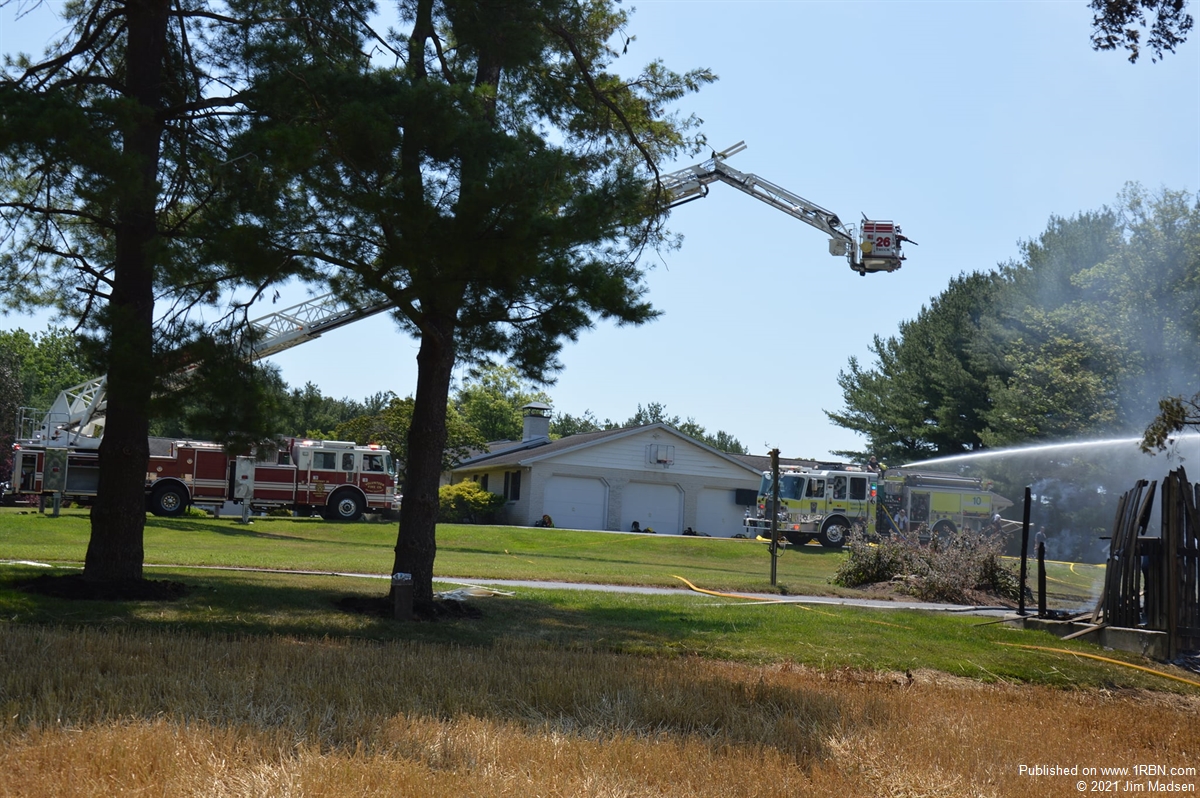 On the morning of June 29th, crews from the Funkstown Volunteer Fire Company were alerted at 10:20 hours with several other departments due on Box 10-15 for a structure fire on Carter Lane, just off of College Road south of Hagerstown. Washington County Emergency Communications 911 Center had multiple reports coming in reporting some type of explosion with heavy smoke coming from the area. Directly after dispatch, Halfway Tower 26 marked up advising they could see a large column of black smoke from Halfway. The Washington County ECC continued to be flooded with calls from miles away reporting the smoke. State Fire marshal Ed Ernst confirmed heavy smoke from Colonel Henry K Douglas Drive.

Funkstown Chief Jerry Keplinger was responding and copied units responding and immediately requested the Safety Assignment and a Tanker Task Force started. Funkstown Engine 10-1 arrived reporting what appeared to be several structures involved with heavy fire conditions that was beginning to spread to an adjacent field. Firefighters deployed multiple attack lines, blitzfires, and deck gun operations to conduct an aggressive attack on the blaze.

Upon termination of the “Mayday”, Command called for the structure to be evacuated and crews changed to a defensive operation. Several ladder trucks set up for ladder-pipe operations. Command requested a 2nd Alarm started to the incident for fresh personnel at 10:47 hours. Firefighters continued their aggressive fire attack for another hour before bringing the blaze under control. Command reported the fire knocked down at 12:14 hours. Firefighters remained committed on the scene for three more hours attempting to soak down the area extinguishing hotspots from the exterior of the building. Due to the heavy damage, Command deemed the structure to unsafe to make entry to conduct overhaul operations. Chief Keplinger terminated command at 15:16 hours report Fire Department Operations were complete and released all remaining units on the scene.

Firefighters responding that day dealt with heavy fire condition as well as high temperatures. The State Fire Marshal’s release showed they were batting a 25’ x 20’ two-story wood-framed garage with a 25’ x 20’ wood-framed, shingled roof carport where a Class-A Motorhome was parked. Maryland State Fire Marshal Ed Ernst was able to determine the point of origin which was the motorhome within the carport area. His preliminary investigation deemed the fire accidental from an electrical failure. Damages to the structure and contents were estimated to be around $150,000. The only injuries reported during the incident were the three firefighters injured during the collapse. The two transported to Meritus Medical Center were treated and released while the one transported to Medstar was admitted for his injuries.