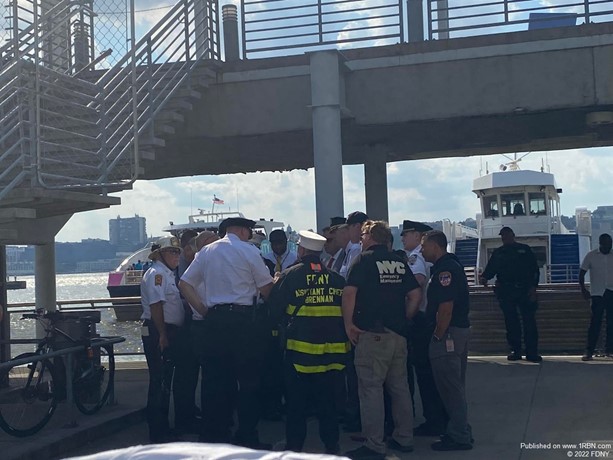 MANHATTAN, NY - (July 13, 2022) - “This is a tragic day for New Yorkers. We lost two people today, a 7-year-old male and a 50-year-old female. In addition, there are two New Yorkers in critical condition in the hospital and an additional New Yorker, who is critical but stable, at the hospital at this time. We also have eight additional people with minor injuries," said Acting Fire Commissioner Laura Kavanagh, from July 12th's water rescue on the Hudson River at Pier 84.

The incident happened around 2:45 P.M. when a vessel that was carrying 12 people overturned. Investigators now suspect that the boat was overloaded for its size, and was likely flipped over by a wave from a passing ferry. Police said the two victims, identified as 7-year-old Julien Vasquez and 47-year-old Lindelia Vasquez, were trapped beneath the capsized boat. Both victims were part of a group of Colombian tourists staying in New Jersey.

FDNY Units worked in conjunction with NYPD Units to remove all the individuals from the water. “I was able to get in and make a surface swim over to the vessel which was upside down. I was able to deflate myself and get under the boat. I encountered an NYPD Diver under the boat. I moved forward and found an air pocket. I located a small individual and was able to remove that individual, and our Rescue Paramedics began medical interventions,” said FDNY Firefighter Ryan Warnock of Rescue 1, who was the Rescue Diver during the water rescue.