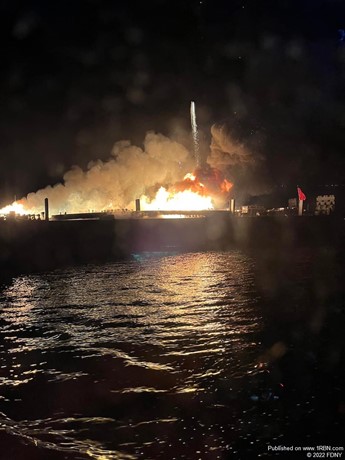 STATEN ISLAND, NY - On July 3rd, FDNY Marine 8 and Marine 9 responded to a barge on fire that was being used to launch fireworks off the coast of Staten Island. FDNY Marine Units arrived on scene and found the barge heavily involved in fire and still actively shooting off fireworks creating a very hazardous situation for both Firefighters and civilians. Firefighters conducted a search to ensure everyone was off the barge and that no one was in the water. Large caliber streams from both Marine 8 and Marine 9 were used to extinguish the fire and bring it under control. Thankfully no injuries were reported.