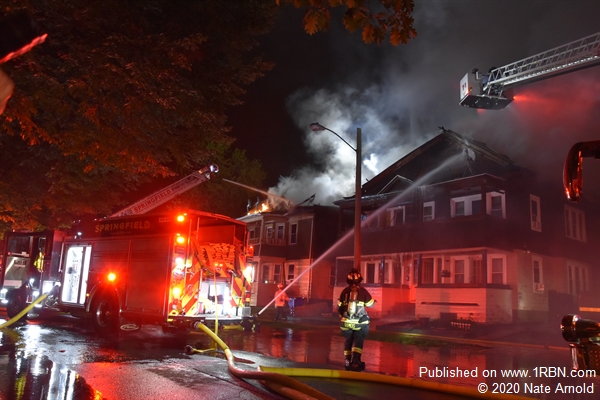 Photo by Nate Arnold Aerial master streams and hand lines play away into the fire buildings on Alderman Street. 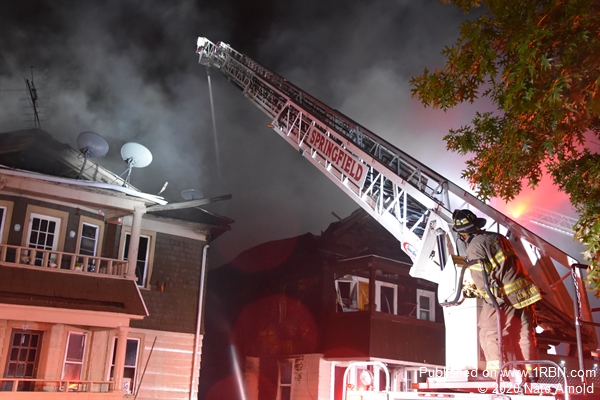 Springfield, MA - A fast-moving fire destroyed two large multi-family homes, displaced 24 residents and resulted in one firefighter being transported for evaluation on Friday, July 10th, in the East Forest Park neighborhood of Springfield.

Springfield Fire Dispatch started receiving 911 calls around 10:00 P.M., and crews spotted fire in the sky over Alderman Street before they arrived on scene. First arriving companies were presented with fire in the second floors and attics of two neighboring two-and-a-half story, wood-frame, multi-family dwellings.

With a total of 24 residents occupying the two buildings and the initial chaos of the large and growing fire, it was reported to firefighters that some people may be unaccounted for and/or possibly still inside the buildings. First-alarm companies began a rapid primary search of the building while the second-alarm was being struck.

At that point, fire was now impinging on a third dwelling and crews on scene were dealt another setback. Water supply on scene became an issue as later arriving engine companies were tagging hydrants on the same main as the first-in companies. As pressure began to drop at the pump panels, the third-alarm was struck, bringing the last available Springfield crews to the scene and requiring mutual aid to take over coverage of the entire city.

The engines due in on the third were ordered to tag hydrants blocks away from the fire scene and lay into the scene with hundreds of feet of supply line. Once this task was accomplished, water pressure on scene normalized and companies set about establishing a full surround and drown attack on the two primary fire buildings, having saved the third from becoming involved in fire.

The main body of fire was brought under control within two hours, but companies would remain on scene for fire watch detail. During the height of the fire, one member of Engine Co. 3 was injured while switching to defensive attack and taken to Baystate Medical Center with non-life-threatening injuries. The Red Cross was assisting the 24 residents displaced with finding temporary housing.