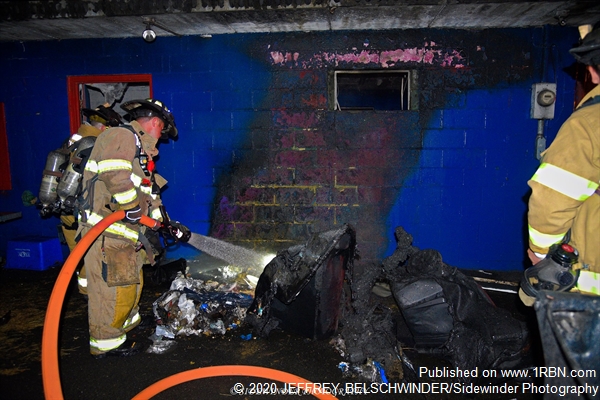 Troy, NY - On June 27th at 10:30 P.M., the City of Troy Police Department notified the dispatcher that they had two trash cans on fire on the side of the central little league at 3130 Seventh Avenue. The officers on scene requested the fire department to step it up, as the building was starting to catch fire.

The dispatcher transmitted the alarm of fire and notified units that the police were on scene and had an active fire condition. Engines 4, 1 and 2, along with Truck 2, Medic 4, the Rescue Squad and the Battalion Chief were dispatched to the incident.

Engine 4 arrived on scene and called for the Signal 30 as he had a working fire that started to extend to the inside of the building. Engine 4 stretched a single hand line to the side of the building and quickly knocked down all of the fire. Firefighters made entry into the building and had a minor smoke condition, minor fire damage where the fire came into the window, and water damage.

Firefighters conducted overhaul on scene for about 15 minutes. No one was injured and the fire is currently under investigation.