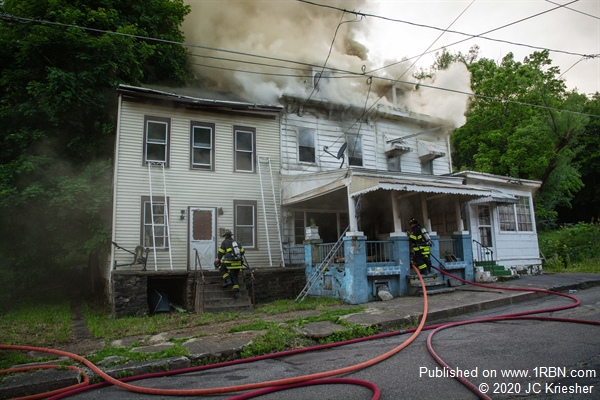 Photo by JC KriesherSmoke pushes from a row of three homes in Girardville as crews work to reach the seat of the fire, 6/16/20. 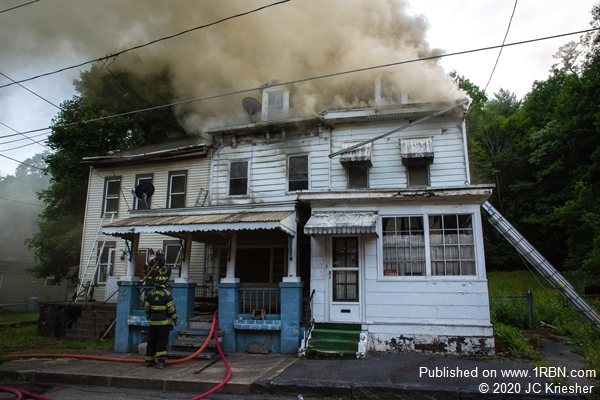 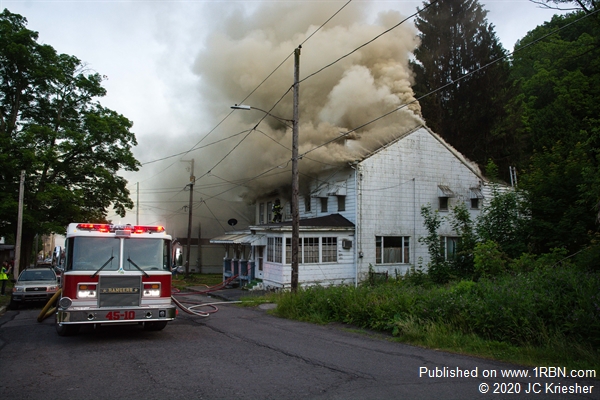 Chief 45 was advised of multiple calls reporting smoke and flames from a residence with someone possibly still inside. A few minutes later, Chief 45 confirmed a working fire and advised that he pulled one person from the fire.

Engine 45-10 was first on scene pulling past the address and secured a water supply from a hydrant at 2nd Street and Mahanoy Avenue; 45-11 followed and positioned at the 'A/B' corner.

Chief 45 advised of a kitchen fire to the rear of the residence with fire spreading throughout the vacant exposures. A second-alarm was requested.

With one line stretched through the front door, additional crews arrived and began to stretch a second line. Command requested an additional supply line be laid from Main Street, which is nearly a 2000' lay. Ashland Engine 38-11 and William Penn Engine 36-13 handled the assignment and set up a relay.

Crews from Ashland’s Ladder and Shenandoah’s Tiller were sent to the roof for ventilation while Truck 2 was sent to the rear.

Multiple lines were stretched into the “D” exposure and to the rear while a ladder pipe was used from Truck 2. Crews worked on the “A” side on the porch roof to rip off siding and worked the second floor.

Girardville crews were at the scene overnight containing flareups. The fire chief attributed the cause of the fire to unattended cooking.