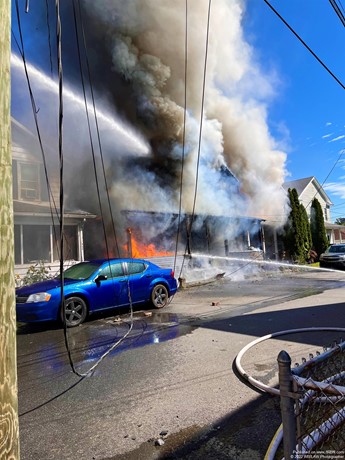 PLYMOUTH, PA - Around 9:40 A.M. back on July 3rd, Plymouth Fire was dispatched to a structure fire with possible entrapment and neighbors reportedly putting ladders up to help get people out.

While en route, Plymouth Fire saw a large black smoke header showing. Plymouth Police pulled up and confirmed multiple structures on fire, with three double blocks fully involved and the siding of one neighboring house starting to melt. Two cars were also on fire, and live power lines were on the ground. Plymouth Fire called for a second-alarm and then 10 minutes later, called for a fourth-alarm box and the Tanker Task Force to help with a water supply.

Once the fire was out, it was confirmed that a six-year-old child was found during overhaul and pronounced deceased. Two firefighters were taken to the hospital for minor injuries sustained. Firefighters battled this fire for seven hours.

The Pennsylvania State Police investigators, along with the coroner's office were called in to investigate and remove the body. Sixteen people that left homeless were being assisted by the American Red Cross.