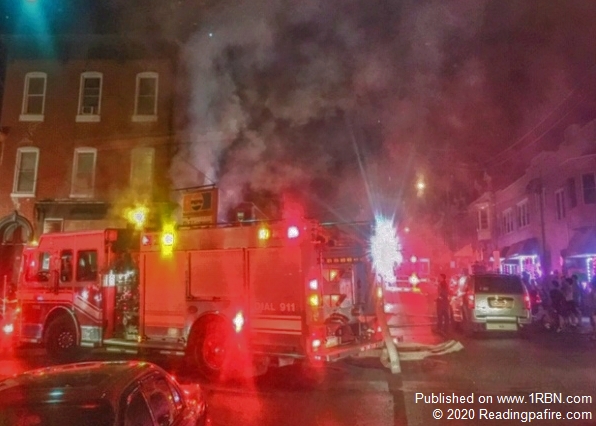 Photo by Readingpafire.comReading Firefighters were dispatched to 10th & Greenwich for a building fire, 7/1/20. Crews arrived with fire in a laundromat and people trapped in the apartments above.

Reading, PA - On the evening of July 1st, dispatchers at the Berks County Dept. of Emergency Services received several calls reporting a fire at a laundromat at 9th & Greenwich Streets.

Tower 1 arrived with smoke showing from a laundromat at 10th & Greenwich and advised all units of the difference in the address. Chief Stoudt (C4) arrived and assumed command at the three-story mixed occupancy.

Neighbors reported people trapped in the apartments above the laundromat. Crews stretched a hoseline into the building and put a quick hit on the fire that was extending into the ceiling above a bank of clothes dryers. Firefighters laddered the building and made their way into the upper floors searching for occupants. One person was found on the second floor and removed quickly. Several kittens were also located by members from Rescue 1 who brought them outside without incident.

The fire was placed under control at 10:27 P.M. The occupant was transported to Reading Hospital for treatment. No other injuries were reported, and the Fire Marshal's Office is investigating.