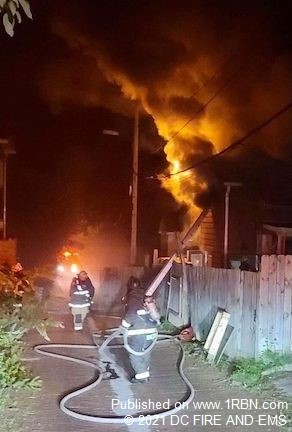 The first was reported at 3:22 A.M. for the report of a carriage house on fire in the rear of the 1300 block of Farragut Street NW. A Box Alarm was dispatched. Firefighters arrived to find fire showing from a two-story stand alone structure in the rear alley that contained a woodwork shop. There were no other structures threatened, and the blaze was brought under control without injuries. Fire investigators were looking into the cause.

The second incident took place in the evening when a Box Alarm was dispatched at 6:30 P.M. for smoke reported coming from a building at 18th and Vernon Street NW. Units arrived to find fire on the top floor of a three-story apartment building in the 1800 block of Vernon Street.

DC’s Bravest were able to quickly get a hose line in place and extinguished the blaze before it could spread beyond the apartment of origin. There were no human injuries, but several pets perished in the fire. Investigators were also on the scene of this incident to determine the cause.