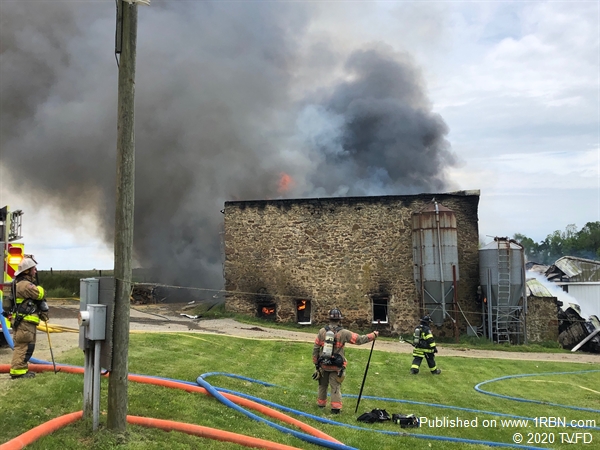 Photo by TVFDFirefighters arrived to find heavy smoke and fire showing from a barn that was connected to several other buildings, 6/24/20. 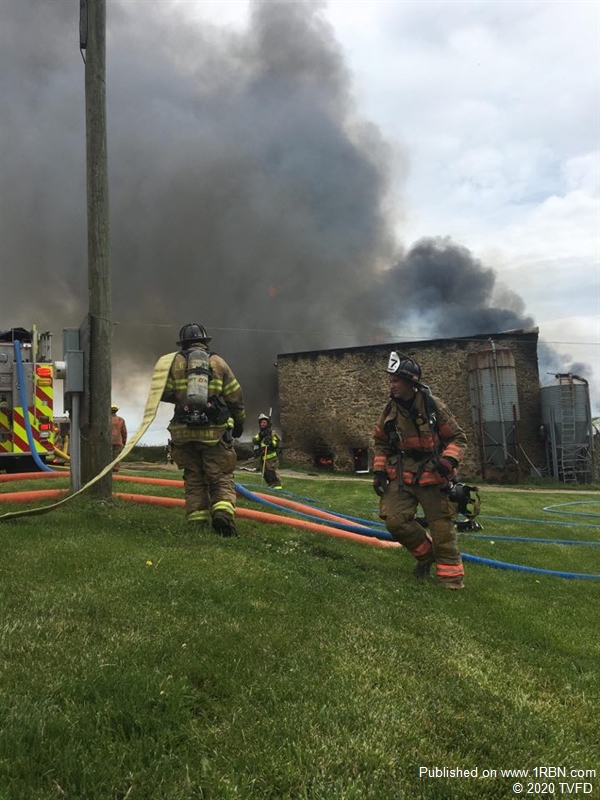 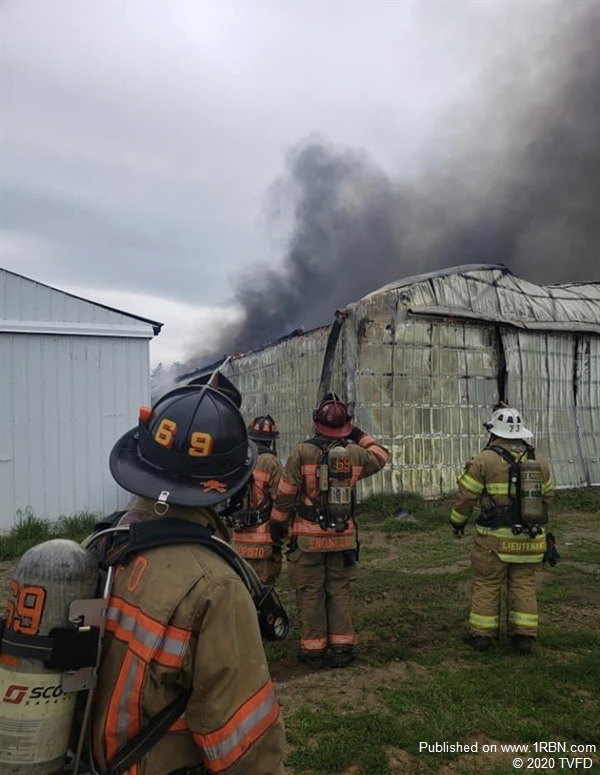 The Chester County Emergency Services Center received a call from a passerby on the turnpike that saw a barn on fire in the area of mile marker 303.5. The dispatcher used that information to direct crews to a farm on Hedge Road. While enroute, Ambulance 89-1 advised Chester that they could see a column of smoke.

Due to multiple calls and the ambulance's report, Chester upgraded the assignment to a working fire. Deputy 69 requested a tanker task force to be dispatched. Ambulance 89-1 arrived and reported a 50'x50' barn that was well involved and threatening a propane tank.

Deputy 69 arrived and assumed command on central ops 1. Ludwigs Corner Engine 73-2, Glenmoore Engine 48-5 and Twin Valley Engine 69-1 all arrived less than a minute from each other. Crews stretched attack lines off of Engine 73-2 while Engine 48-5 supplied water and Engine 69-1 laid a supply line into the scene from the main road. Crews immediately began dousing the propane tank to protect it as other lines began putting water on the fire.

Crews quickly discovered that the fire had already extended into a second barn that was connected to the initial barn. While heavy water lines were used to try and halt the fire's progress, crews were unable to stop the second barn from becoming fully involved. At that point crews began focusing on protecting a third barn that was beginning to catch fire.

Due to the heavy fire load a second-alarm tanker task force was requested to the scene for additional water supply. At 2:30 P.M., the structural integrity of the second barn began to deteriorate, and the evacuation tones were put out to clear firefighters from all buildings in the complex. Crews began an exclusively defensive attack as the amount of available water decreased. Once a constant water supply was established, crews were able to quickly knock down a bulk of the fire in both barns.

Even though a majority of the fire was out, crews stayed out of the barns until an excavator arrived to assist with overhaul. The excavator arrived and began tearing through debris in the second barn as crews extinguished hot spots. Once crews finished dealing with all the hot spots, the excavator was brought to the initial barn which was full of hay.

Crews worked for over an hour digging through the massive pile of hay and dousing hot spots. Once the hot spots were extinguished crews began breaking down hand and supply lines. Crews cleared the scene at 9:29 P.M., just over eight hours after the initial call.