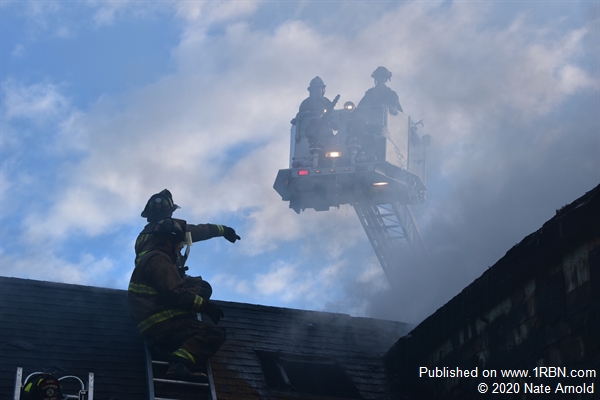 Photo by Nate Arnold Members on the roof communicate with members in Ladder 1's bucket.

West Springfield, MA - An early morning fire displaced two residents from their home in the Mitteneague neighborhood of West Springfield at 5:45 A.M. on Sunday, June 14th.

West Springfield firefighters got the call just before 6:00 A.M., and could see the column of smoke from the fire even before they arrived on scene. Crews found heavy fire venting from the 'Charlie' side first floor of this occupied two-story, single-family dwelling, and extending up into the second floor and attic space.

A second-alarm was sounded, bringing all on duty WSFD personnel to the scene and mutual aid from Springfield and Agawam for station coverage. The fire had gained possession of a significant portion of the building and forced firefighters to switch between an interior attack and exterior attack before bringing the main body of fire under control.

Companies spent the better part of one-hour-and-a-half working to ensure that the fire was completely extinguished. Neither resident required transport to the hospital, and the cause of the fire remains under investigation by the WSFD Fire Investigation Unit and the State Fire Marshal's Office.